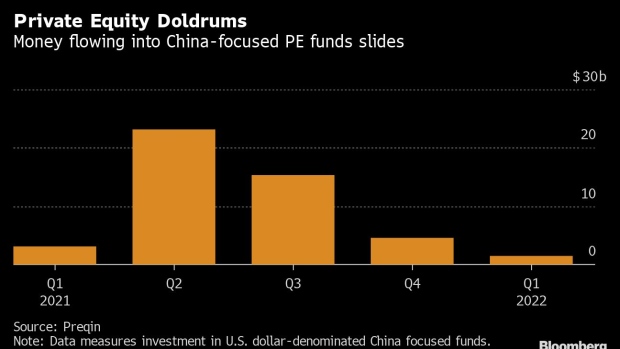 (Bloomberg) -- Carlyle Group Inc.’s new $8.5 billion Asia fund aims to have as little as half the exposure to Greater China as previous funds, driven by investor concern over rising geopolitical risks and regulatory uncertainty in Beijing, according to people familiar with the matter.

The Washington-based asset manager is telling investors that the targeted China exposure for its sixth Asia fund will be about 20% to 40%, compared with 40% to 50% on average for predecessor funds, said the people, asking not to be identified as they’re not allowed to discuss fundraising.

The drop in allocation is noteworthy because Carlyle has been one of the biggest foreign investors in China for decades, snapping up stakes in restaurant chains, logistics and biotech firms for a combined $10.5 billion. Investments have included stakes in the local McDonald’s Corp. business and video giant ByteDance Ltd., along with Abbisko Therapeutics Co. and Shenzhen Salubris Pharmaceuticals Co.

Investor sentiment is changing after the country’s growth outlook was walloped by Covid-19 lockdowns, while growing tensions with the US over trade, human rights, and stock listings have dented appetite and heightened concerns about portfolio exits. Harvard University’s endowment is considering tapering its investments, people familiar with the matter said in April. U.S. dollar-denominated funds targetting China raised just $1.4 billion in the first quarter, the lowest amount for the period since 2018, according to research firm Preqin.

A Hong Kong-based spokeswoman for Carlyle declined to comment.

The $8.5 billion target fund would be Carlyle’s biggest in Asia, 30% larger than its last offering of $6.55 billion in 2018. The firm is also raising $22 billion for its global flagship private equity fund. The relatively lower China investment reflects the increased size of the fund and higher deal activity in other markets including South Korea, Southeast Asia and Australia, the people said.

Carlyle still intends to be active in China, which remains a key market especially as valuations have come down, one person said. Almost half of the firm’s 20 managing directors in Asia outside Japan are China focused.

India will also pick up some of the slack from China. Carlyle is doubling down on the country to tap growth and the better prospects for investment exits. Asia Chairman Yang Xiangdong, who led an investment in China Pacific Insurance (Group) Co. and made one of the best exits for the firm, said in a November interview that India’s investment is catching up with China.

Carlyle invested 45% of its fifth Asia buyout fund in India, surpassing China for the first time, up from 20% in the fourth fund, according to one of the people. Among the earliest foreign players in India, Carlyle has invested and committed more than $5.5 billion across 44 deals and hired former Blackstone Inc. Senior Managing Director Amit Jain as co-head of Carlyle India in November.