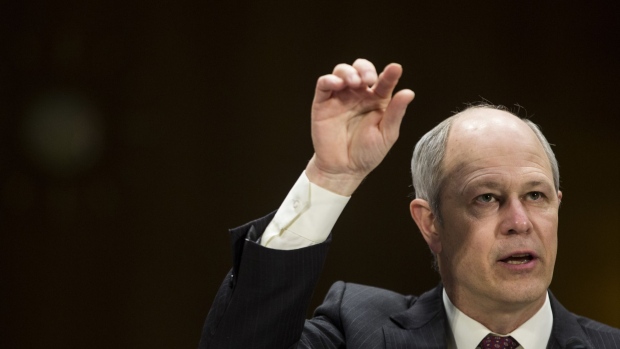 Kevin Phillips, president and chief executive officer of ManTech International Corp., testifies during a Senate Intelligence Committee hearing on security clearance reform on Capitol Hill in Washington, D.C., U.S., on Wednesday, March 7, 2018. At least 30 administration officials have had their clearances downgraded, including son-in-law and Senior Adviser to the President Trump, Jared Kushner. , Bloomberg

(Bloomberg) -- Private equity firm Carlyle Group Inc. is in advanced talks to acquire ManTech International Corp., a government contractor that also does IT services, according to people familiar with the matter.

A deal could be announced as soon as this week, said the people, who asked not to be identified because the information is private. The transaction values ManTech at about $4 billion, the people said.

An agreement isn’t finalized and talks could still fall apart.

Representatives for ManTech and Carlyle couldn’t be reached for comment.

ManTech shares closed on Friday at $81.97 apiece, giving the company a market value of $3.35 billion.

ManTech, based in Fairfax, Virginia, provides IT services including analytics and cybersecurity, primarily to US defense and intelligence agencies.

George Pedersen, who co-founded ManTech in 1968, served as its chief executive officer until 2018 and as chairman until 2020. He retained his chairman emeritus title before retiring from the board in February. He still owns a big chunk of the company, according to data compiled by Bloomberg.

Carlyle has been an active investor in government services companies, according to its website. It sold one of its portfolio companies in the space, Novetta, last year to Accenture Federal Services, according to a press release.