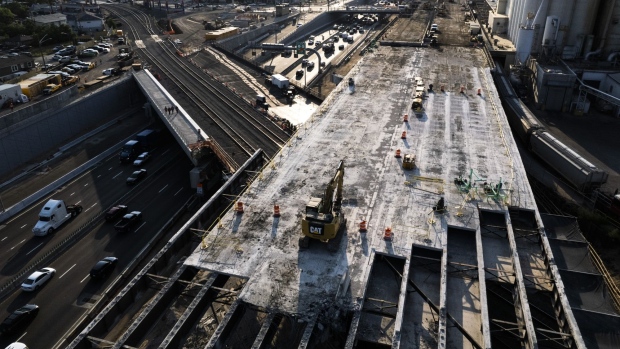 A construction crew works at a site for the Central 70 project at Interstate 70 in Denver, Colorado, U.S., on Thursday, July 15, 2021. Lawmakers have been battling for months to move ahead with an infrastructure package to improve the nation's ailing roads, bridges and transit systems. , Bloomberg

(Bloomberg) -- Carlyle Group Inc. is planning to raise a new fund dedicated to long-term infrastructure bets, according to people with knowledge of the matter.

The Washington, D.C.-based firm has begun discussing the Carlyle Diversified Infrastructure Fund with potential investors, said the people, requesting anonymity discussing confidential talks. The open-ended fund would have targeted returns of 8% to 10%, the people said. Carlyle previously focused on closed-ended infrastructure funds, with targeted returns of 12% to 15%.

The firm in 2019 raised $2.2 billion for the Carlyle Global Infrastructure Opportunity Fund, which has made bets on redeveloping Terminal One at New York’s John F. Kennedy Airport, renewable energy companies Amp Solar Group Inc. and Copia Power, and data-center operator Involta. Its infrastructure effort is led by partners including Macky Tall and Pooja Goyal, among other executives, Carlyle’s website shows.

Institutions including infrastructure specialist IFM Investors make bets through open-ended funds, and have touted benefits of the long-term approach including not having to sell holdings within a specified time frame. Such longevity can help secure partnerships with governments, regulators and existing operators.