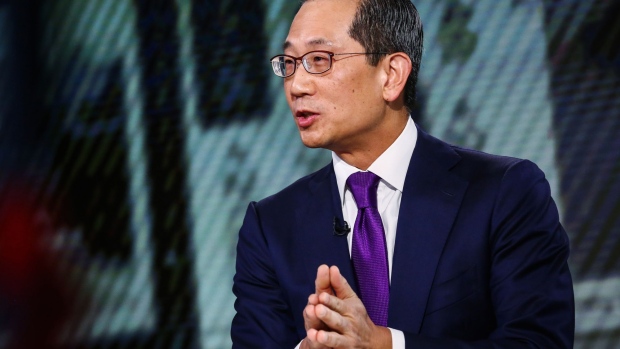 (Bloomberg) -- Carlyle Group Inc. is embarking on a multi-year plan to supercharge growth and raise more than $130 billion.

Senior managers led by Chief Executive Officer Kewsong Lee will lay out their strategy Tuesday during the firm’s first investor day since 2013. The team will be tasked with expanding core businesses and meeting new financial targets.

Carlyle, which oversees $246 billion, has continued to evolve since its founders stepped back in 2018. Lee became sole CEO last year after counterpart Glenn Youngkin stepped down to pursue a career in politics. Last month, Carlyle said it was streamlining the company, reducing four business segments to three and focusing on areas with the most growth potential.

“We are thinking bigger, performing better and moving faster to position Carlyle to deliver higher returns for our shareholders,” Lee, 55, said in an emailed statement. “We have tremendous confidence in this strategic plan and hope all of our stakeholders appreciate our commitment to transparency as we evolve and build the firm.”

Carlyle aims to hit its $130 billion fundraising target by 2024. That money is expected to be drawn from existing groups like global credit and private equity, which now include bets in real estate and natural resources. The firm’s last buyout fund was its biggest ever, at $18.5 billion. Carlyle is expected to begin raising money for a new flagship buyout fund this year, according to people familiar with the matter.

But senior leaders at the Washington-based alternative asset manager see even more opportunity to raise cash by bringing in new products and expanding strategies in insurance and infrastructure. The firm hired Macky Tall, who led the infrastructure group at Canada’s second-largest pension fund, at the end of last year.

Much of Carlyle’s recent dealmaking has been focused on the technology and health-care industries. Its investment portfolios have performed well during the pandemic, posting gains across all business units last quarter. Private equity funds rose 11%, with credit and investment-solutions funds up 7%. The firm brought in $27.5 billion in capital last year.

Carlyle will also announce Tuesday that it plans to more than double distributable earnings to at least $1.6 billion.