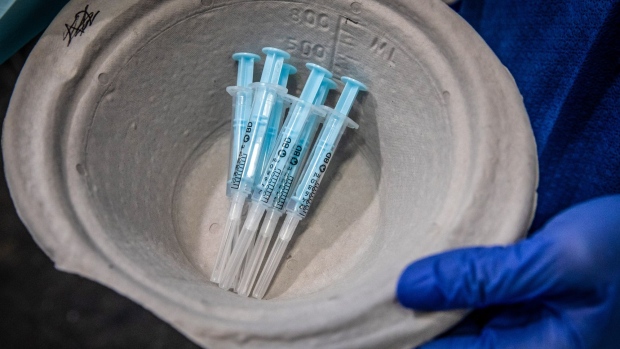 Syringes containing a dose of a Covid-19 vaccine at a mass vaccination center inside the Fira de Barcelona exhibition space in Barcelona, Spain, on Sunday, May 2, 2021. Western Europe is heading toward a critical phase in its fight against the coronavirus pandemic as accelerating vaccination rates open up the prospect of easing lockdowns and reviving economies. , Bloomberg

Carlyle, a private-equity firm that oversees $260 billion of assets, and Warburg, with $60 billion, told U.S. employees of the policy in recent days, according to people familiar with the plans. They’re among the first financial-services companies to demand that employees get vaccinated in order to work in the office.

A Carlyle spokeswoman confirmed the information, announced last week at a town hall meeting, and Warburg declined to comment. Warburg has told employees that accommodations can be made for those who don’t get the shots, said a person familiar with internal communications. Carlyle said at its town hall that getting the vaccine was not a condition for remaining employed.

Employers may demand vaccines and request proof under federal law, according to guidance provided last week by the Equal Employment Opportunity Commission. Workers can ask for exceptions for religious or medical reasons.

Most companies have opted to encourage rather than demand that staff get vaccines, offering to lift mask or testing requirements. About 20% of employers are mandating them in order to return to the office, according to a Morning Consult poll of 1,070 working adults conducted for Bloomberg News at the end of May.

Read more: Employees Are Quitting Instead of Giving Up Working From Home

Recent employee surveys by hedge funds and other money managers indicate that while firms have a higher-than-average vaccination rate, some holdouts remain.

Millennium Management told employees of the $50 billion hedge fund that 80% of U.S.-based staff were at least partially vaccinated and an additional 8% planned to be inoculated, according to an employee who received an email disclosing the results of a recent internal survey.

The firm isn’t mandating vaccines, but those without them must be tested daily for Covid-19 and wear masks when they return to the office.

Blackstone Group Inc., which also won’t require shots, plans to ask employees if they’ve been inoculated and will work to socially distance them in the office.

Blackstone, Millennium and Carlyle all found that less than 5% of employees planned to forgo shots, according to people familiar with the firms’ internal surveys.

One hedge fund executive, who asked not to be identified discussing company policy, said among the few people at his firm who indicated they won’t get vaccinated are young women concerned that doing so would impede their ability to get pregnant. The Centers for Disease Control and Prevention has said there’s no evidence that vaccines, including those for Covid-19, cause infertility.

Across the U.S., 66% of adults surveyed in May have or plan to be vaccinated, according to the Kaiser Family Foundation, while 13% said they would definitely not get a shot. The foundation also reported that Republicans and people age 30-to-49 were among those most likely to say they wouldn’t get inoculated.

While the firms requiring vaccines haven’t said what will happen to employees who refuse to comply, employment lawyers say it could be grounds for dismissal.