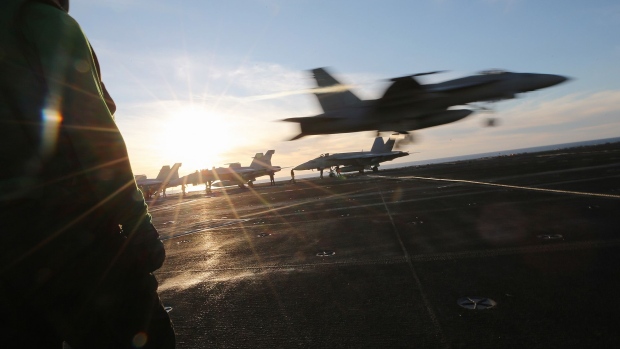 A U.S. Navy sailor maintenance worker (L) keeps watch on the flight deck during flight operations aboard the USS Nimitz (CVN 68) aircraft carrier, while at sea, on January 18, 2020 off the coast of Baja California, Mexico. , Photographer: Mario Tama/Getty Images

(Bloomberg) -- Carlyle Group Inc. is considering a sale of Titan Acquisition Holdings and is working with an adviser on an auction process for the military contractor, according to people familiar with the matter.

Titan, which is owned by Carlyle and Stellex Capital Management, could be valued at $2 billion in a sale, said one of the people, who asked not to be identified because they weren’t authorized to speak publicly. The Portland, Oregon-based company is likely to be of interest to other defense companies and private equity firms, the people said.

No final decisions have been made and Carlyle and Stellex could still elect to keep the business, the people said.

Representatives for Carlyle and Titan didn’t immediately respond to requests for comment. A spokesperson for Stellex declined to comment.

Titan, which is led by Chief Executive Officer Jim Marcotuli, was created in 2019 through the merger of Vigor, which specializes in providing infrastructure, defense and maritime services, and MHI Holdings LLC, a ship repair and maintenance services company. Titan’s clients include the U.S. Navy and Coast Guard, according to its website.

Carlyle is continuing its expansion into new asset classes under CEO Kewsong Lee, with plans for a new open-ended fund dedicated to long-term infrastructure investments. The Washington-based firm is hoping to raise as much as $27 billion for its next flagship buyout fund.