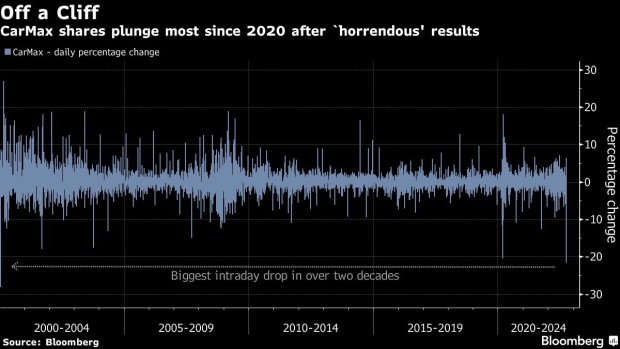 A customer shops for a used vehicle at a CarMax dealership in Louisville, Kentucky, U.S., on Thursday, June 24, 2021. CarMax Inc, jumps 5.8% in premarket trading after it reported revenue for the first quarter that beat the average analyst estimate. , Bloomberg

The results sparked a steep selloff in CarMax shares, and weighed heavily on the stocks of its peers, as well as auto manufacturers and suppliers. CarMax closed down 25% at $65.16 Thursday, marking the biggest daily plunge in over 22 years. Peers, including Carvana Co. and Sonic Automotive Inc., also tumbled.

“CarMax has reminded Wall Street that parts of the economy are already in a recession,” said Ed Moya, senior market analyst at Oanda Corp. The “affordability challenges” highlighted by the company as the main reason for the big miss suggest it is “only going to get worse as Fed tightening starts to impact the economy,” Moya added.

With investors continuing to search for clues about the fate of the US economy over the next few months and into 2023, they are closely watching for signs that can offer insights into the health and resilience of the consumer. CarMax’s earnings put a dent in whatever optimism existed.

“When you combine these results with the story from yesterday that demand for iPhones is weak, it raises the question about the consumer as we move toward the holiday selling season,” said Matt Maley, chief market strategist at Miller Tabak + Co. “If the consumer is weak, you can take a soft landing off the table.”

The Richmond, Virginia-based company’s shares were the biggest decliners on the S&P 500 Index as the market opened on Thursday. Carmakers General Motors Co., Ford Motor Co., and auto supplier Aptiv Plc. also sold off sharply, as investors worried about how the decisions of a squeezed US consumer will reverberate through the entire automotive industry, and the broader economy.