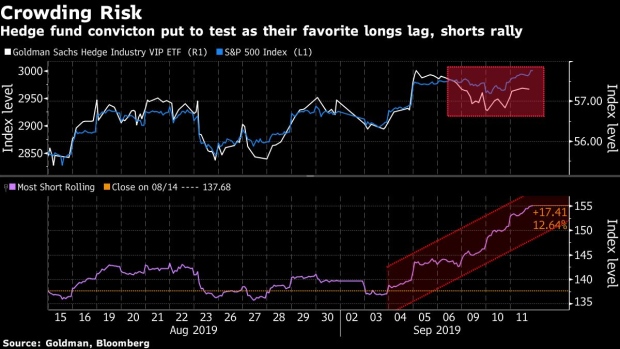 (Bloomberg) -- Equity hedge funds are paying dearly for their devotion to industries like software and distaste for energy and commodity stocks. Wrong-way moves in positions they’ve crowded into, both long and short, could raise survival risk for some managers, one firm says.

“This unexpected, profit-sapping dislocation has definitely hurt the majority of clients,” said Mark Connors, global head of risk advisory at Credit Suisse. “Some managers may not make it through the month.”

Research from Wall Street brokerages is painting a grim picture of goings-on beneath the tranquil surface of an equity market whose benchmark proxies haven’t moved much in the past week. The churn, in which 2019’s biggest winners fell and losers rose, has landed hard on professional speculators.

According to Morgan Stanley’s prime brokerage unit, the violent moves in the past two weeks crescendoed Monday with a hedge-fund alpha gauge the firm devised, plotting returns in popular longs versus those in favorite shorts, notching its second-worst showing of the year. Similar unwindings have occurred five other times since 2014 and they tended to last four to five weeks, the firm found.

Hedge funds face a double blow as both longs and shorts work against them. Shares that almost everyone loves, such as software makers, have lagged behind in September, with a Goldman Sachs basket of the industry’s VIP holdings returning less than half the market gain.

Meanwhile, companies targeted by short sellers, like energy producers, have staged a stunning rebound. A measure of the most-shorted stocks has rallied almost 10% this month, delivering losses to those betting prices would fall.

“Trends of rising portfolio concentration, falling position turnover, and increased crowding have accelerated in recent quarters and increased the risk of a positioning-driven unwind,” Goldman Sachs strategists including Ben Snider and David Kostin wrote in a note Wednesday. The firm’s hedge fund crowding index rose in the first half to a three-year high.

The pain of favorite trades coming asunder was particularly acute on Monday. In a flat session, the 50 most popular stocks fell 90 basis points while the 50 most crowded shorts gained 80 basis points, client data compiled by Morgan Stanley showed. The long-short spread, the firm’s measure of the industry’s above-market returns, or alpha, trailed all other days of 2019 except for June 3, when tech stocks sold off amid regulation anxiety.

The alpha from crowded longs and shorts has been negative almost every session this month, weighing on performance. Long-short hedge funds tracked by Morgan Stanley have lost an average 0.6% through Monday, compared with a gain of 1.8% in the S&P 500.

To curb losses, managers have been scrambling to shuffle holdings, trimming popular longs and buying back shorted shares. On Monday, their selling of single-stock longs jumped to a 10-month high while four-day short covering increased to levels not since this year.

To be sure, it could end up being just a few bad days. And while returns from crowded stocks have shrunk, their total alpha in 2019 still exceeds all but one of the past six years over comparable periods, Morgan Stanley data showed.

Other than honing portfolios, there is little sign that hedge funds are abandoning their old playbook, which is to keep stock exposure high while earmarking the bulk of positioning to shorts. In other words, they continued to resist embracing the rally that has driven the S&P 500 up almost 30% from its December lows.

The ratio of their long to short positions, known as net leverage, was little changed from a week ago, sitting in the 14th percentile since 2010, Morgan Stanley data showed. Meanwhile, gross leverage, a gauge of risk appetite that adds up both long and short positions, was in the 92nd percentile.

The reluctance to switch gears may have something to do with the fact that overall this is not a terrible year for the industry. Up 7.7% in the first eight months of 2019, funds that focus on equities are on course for their second-best year since 2013, according to the HFRI Equity Hedge Total Index.

Elevated gross leverage poses a threat to crowded stocks, according to Morgan Stanley, whose study shows that leverage has tended to have a strong relationship with the performance of those shares. When high-conviction companies do well, leverage rises, and vice versa.

The latest crowd unwinding still pales in comparison to the last instance in November. Back then, the relative return ratio between the top 50 longs and top 50 shorts dropped more than 7% over three weeks. This time, it fell 1.6% over the week through Monday. The decline from the previous five cases averaged 4.5%.

“The dip in crowding so far is only about one third to one half the magnitude of prior drops, suggesting there’s room for this to continue,” Morgan Stanley wrote in the note to clients Tuesday. “We have recently seen some de-grossing amid the factor unwind that has been playing out, but there’s room for funds to de-gross further and it could be quite painful for returns.”