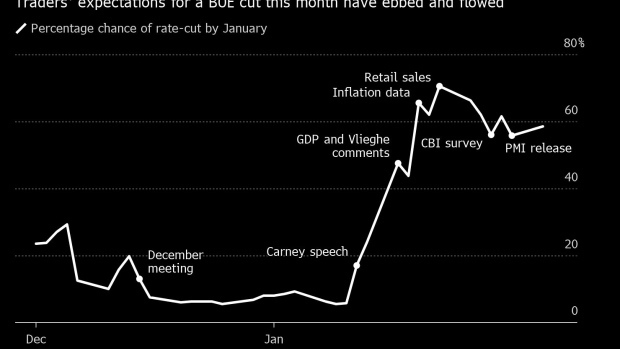 (Bloomberg) -- Mark Carney’s final decision at the Bank of England is on a knife edge, and the governor hasn’t done anything to ease the tension.

While the Canadian, who hands over the reins to Andrew Bailey in March, has mostly held investors’ hands before crucial policy meetings, this time he’s allowing them to figure it out for themselves by sifting through a slew of conflicting data.

That’s left expectations going into the meeting delicately poised, with traders seeing an almost 60% chance a move, the most divided they’ve been this close to a decision under Carney’s reign. In a further sign of uncertainty, economists in a Bloomberg survey predicted five different results for the vote splits among the Monetary Policy Committee’s nine policy makers, although the majority expects a 6-3 vote to hold.

The cliffhanger is a fitting end for the governor, who has faced criticism in the past for what investors have seen as communication missteps. He hasn’t been able to shake the “unreliable boyfriend” moniker since a lawmaker called him that in 2014.

Despite his reputation, Carney’s BOE has sent very strong signals ahead of previous live meetings, either dropping concerted hints a move was imminent or, as was the case in spring 2018, pushing back against climbing bets on a change in policy. Traders were fooled once, in the summer of 2016, when Carney signaled a cut was coming in the month after the June Brexit referendum. The move eventually came in August.

This time around the signals have been more mixed. There were a number of dovish comments and speeches at the start of 2020, grouped together partly in a reflection of the limited time officials had to speak between meetings. Most policy makers indicated their vote would be linked with incoming data. Carney, meanwhile, has stayed quiet on policy since his Jan. 9 speech that kicked off the bets on easing, declining to quell expectations in the intervening period.

With Bailey about to step in, Carney might want to take the pressure off his successor if cuts are needed soon by acting now. That would echo his former European Central Bank counterpart, Mario Draghi, who unveiled more stimulus before he left in November.

The problem for investors is judging which economic reports are more important. Generally, the official reports this month, which cover November and December, have been disappointing, while the more up-to-date surveys of sentiment have been upbeat and provided signs of economic bounce following Boris Johnson’s election win last month. BOE officials will also likely draw heavily on their network of agents, which won’t be publicly released until the decision is announced.

What our Economists Say:

“The small amount of data we’ve had for the period since December’s general election suggests growth could pick up pace this year. We think the news will be enough to keep rates steady in January but it’s far from certain. The majority of the MPC may still see merit in loosening policy to underpin an expected rebound in growth.”

The upshot is that traders still see a cut as more likely than not, even after a report Friday showed U.K. economic activity roared back to the highest level since 2018 in January. One argument for a move, used by rate voter Michael Saunders, is that even if a cut proves to be the wrong step, it can easily be reversed.

“We expect next week’s outcome to be finely balanced,” Deutsche Bank economist Sanjay Raja wrote in a note last week. “That said, we continue to think the MPC will opt for a risk management approach to monetary policy. What does this mean in practice? Simply put, it means cut early and be prepared to cut more if the economy doesn’t shake off its sluggishness.”

To contact the editors responsible for this story: Paul Gordon at pgordon6@bloomberg.net, Brian Swint, Andrew Atkinson