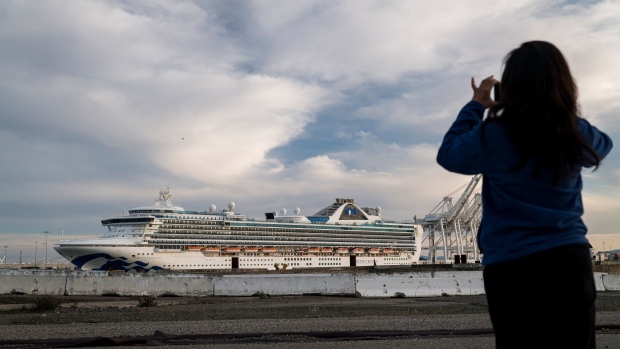 A person takes a photograph of the Carnival Corp. Grand Princess cruise ship docked at the Port of Oakland in Oakland, California, U.S., on Monday, March 9, 2020. The cruise ship that spent days circling the waters off San Francisco with people sickened by the new coronavirus returned to land at an isolated dock, to begin the long process of offloading passengers into quarantine. , Jonathan Levin

Carnival, the world’s biggest cruise company, filed to sell as much as US$1.5 billion in stock after its shares surged on Monday. American Airlines separately priced an offering of about US$500 million in common stock at US$13 per share, people familiar with the matter said.

The moves come at an opportune moment: Investors in both companies are optimistic that a COVID-19 vaccine could lift their fortunes. For Carnival, Monday’s gain was the biggest one-day increase ever. Still, the stock remains down about two-thirds this year -- and the downward slide resumed on Tuesday.

In a filing Tuesday, Carnival said it would raise money for general corporate purposes. The Miami-based company recently completed the sale of 67.1 million common shares under a similar program.

Cruise companies are trying to convince regulators and consumers that cruising is safe, but the industry may face an uphill battle until a vaccine is widely available. Anticipation of the shares getting diluted also weighed on the stock Tuesday. The shares fell as much as 12 per cent to US$16.91 in New York trading.

Separately, Norwegian Cruise Line Holdings Ltd. Chief Financial Officer Mark Kempa said on a conference call Tuesday that the company would look at potential capital raises “on an opportunistic basis,” while adding that he had a “solid runway” of cash and wasn’t in a rush. Kempa said the potential moves could include raising money in the equity market.

To shore up their coffers amid the pause in operations, cruise companies have already had to sell equity stakes for cheap and pay unusually high interest rates on new debt.

Last month, a conditional order from the U.S. Centers for Disease Control and Prevention created a pathway for cruise lines to return to U.S. waters. But companies will need to first prove that cruising is safe.