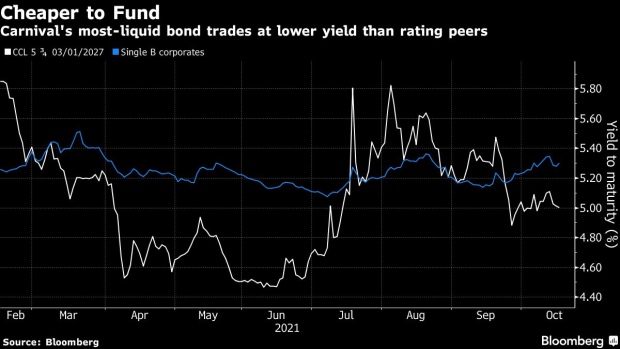 (Bloomberg) -- Carnival Corp. is selling $1.5 billion in new junk bonds to pay down debt and push out maturities, just over a week after it boosted the size of a leveraged loan deal that helped the company slash its borrowing costs.

An investor call began Tuesday at 11 a.m. in New York and the 7.5-year unsecured notes are expected to price later in the day, according to people with knowledge of the matter, who asked not to be identified discussing a private transaction.

Proceeds will be used to make scheduled principal payments on debt during 2022 and for general corporate purposes, the people added.

The cruise operator is focused on “clearing the runway” of near-term debt maturities as it works to return all ships to water, said Bloomberg Intelligence analyst Jody Lurie. Management has guided for higher cash burn in the fourth quarter with a return to positive free cash flow by mid-next year.

“Carnival is clearing any stumbling blocks out of the way to normalcy,” Lurie said.

While the Miami-based company said it expects to return its full fleet to the seas by the spring of 2022, it’s still burning through cash as voyages resume. Carnival’s long-term debt stood at $28 billion as of the end of the third quarter, up from $9.7 billion at the end of 2019.

The deal follows a $2.3 billion loan sale earlier this month, which was increased from $1.5 billion and helped the cruise ship operator replace expensive 11.5% debt issued near the outset of the pandemic. Financing costs on the new loan were closer to 4%.

Carnival has already trimmed over $250 million in interest expense through loan refinancings this year, according to Bloomberg Intelligence calculations. Its ability to refinance cheaply shows both investors’ optimism for the cruise industry and the dearth of opportunities in a market still buoyed by liquidity.

Today’s deal would make Carnival the second biggest junk-bond issuer by dollar volume this year, behind T-Mobile US Inc., according to data compiled by Bloomberg.

If the company is indeed able to return toward pre-pandemic operations and generate positive cash flow next year, its bonds could tighten toward those of competitor Royal Caribbean Cruises Ltd.’s, which currently trade slightly tighter, Lurie said.

Bank of America Corp. is managing the sale of the new offering.