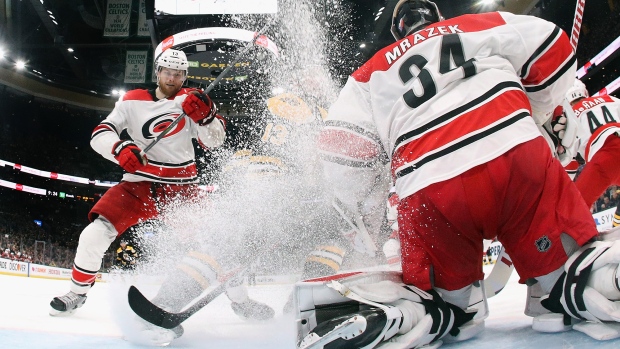 Warren Foegele #13 and Petr Mrazek #34 of the Carolina Hurricanes defend the net against the Boston Bruins in Game One of the Eastern Conference Final during the 2019 NHL Stanley Cup Playoffs in Boston on May 09, 2019. , Bruce Bennett/Getty Images

Each of the team’s playoff home games -- two against the New York Islanders and three against the defending champion Washington Capitals -- eclipsed US$200,000 in merchandise sales, according to Mike Forman, vice president of marketing and brand strategy. The previous record for the National Hockey League franchise was US$187,000.

The numbers are a reminder about the lucrative revenue implications of making the playoffs, and the evolution of in-arena merchandise sales. The Hurricanes won the Stanley Cup in 2006, but this is their first playoff appearance in 10 years.

The Hurricanes host the Boston Bruins Tuesday night in Game 3 of the Eastern Conference finals, which they trail 2-0. During the previous round of the NHL Playoffs, no team sold more merchandise per fan than the Hurricanes, according to Forman.