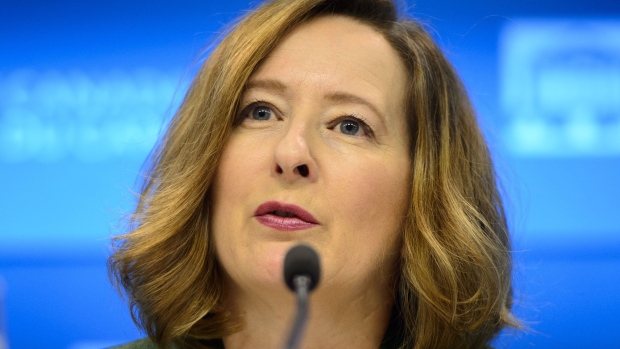 OTTAWA -- The second-in-command at the Bank of Canada is moving up her departure date to next month.

The central bank says Carolyn Wilkins will leave her job as senior deputy governor on Dec. 9, about five months before her seven-year term ends in May, and on the same day the bank makes it final rate announcement for 2020.

Wilkins ended months of speculation about her future in September when she announced publicly that she wouldn't be seeking a second term.

She had been considered a top candidate for the position of governor, but the Liberals handed the reins to Tiff Macklem, who took over in June.

In a brief statement Thursday, Wilkins says the end of the calendar year is the right time for her and the bank to part ways.

"The end of the year provides for an appropriate time for me to leave the Bank, so that I can explore the next chapter in my career," she said in a statement released by the bank.

"It also enables Governor Macklem and the Board to move forward in solidifying the team that will manage the economy through recovery and achieve the longer-term goals of the Bank."

Wilkins was named senior deputy governor in 2014. At the time she replaced Macklem, who likewise had been considered a top candidate for governor during his time as the central bank's second-in-command until Stephen Poloz was tapped for the job.

Wilkins has spent about 20 years at the Bank of Canada. More recently, she has led some of the bank's response to the COVID-19 pandemic, including a foray into quantitative easing to pump money into the economy and snapping up government and corporate debt at an unprecedented rate in an effort to keep credit markets working.

In his own statement, Macklem said Wilkins has strengthened the central bank's research efforts, enhanced its diversity, and expanded its digital capacity.

"Carolyn has provided exceptional leadership as an economic policymaker these past six and a half years," he said.

"While she will be sorely missed, her many contributions will be felt by all of us for many years to come."

The bank's board of directors has started searching for her replacement, and a public advertisement for the position was posted online Wednesday.

The posting calls for someone with a "sophisticated understanding of economics and finance" and deep knowledge of the country's financial system.

It also says the successful candidate will have experience in leading "an organization through change and uncertainty" while also help the bank "maintain its independence and credibility with financial markets, key domestic and international stakeholders and partners, and the Canadian public."