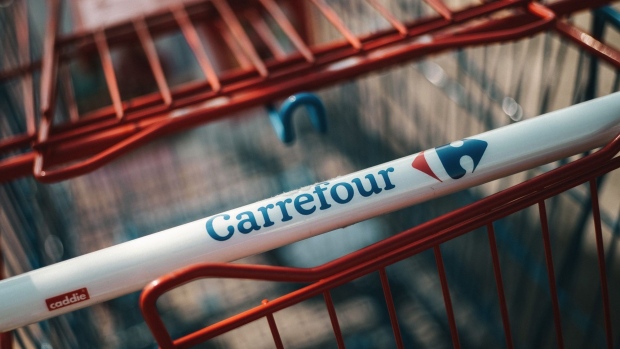 Comparable sales in the country, Carrefour’s biggest market, fell 0.3% in the third quarter excluding gasoline and calendar effects, the grocer said in a statement Wednesday.

The decline was in line with analyst estimates, but shows why Carrefour Chief Executive Officer Alexandre Bompard has been under pressure to accelerate a turnaround plan -- or to explore other options. Bloomberg News reported this month that rival grocer Auchan had made an approach to acquire Carrefour, but that the talks had stalled. It was the second time in less than year that discussions on a possible combination collapsed.

Comparisons with 2020 results became even tougher for Carrefour after the government imposed rules in August requiring people to show a health pass at larger public spaces. That affected traffic in some of Carrefour’s bigger hypermarkets, where consumers can buy a range of products in addition to groceries.

In the same period a year earlier, Carrefour experienced the best revenue growth in at least two decades as stay-at-home policies led to more grocery sales. Authorities in France started eliminating curfews in May, and restaurants reopened following a successful vaccination drive.

“Hypermarkets were temporarily impacted by the introduction of the sanitary pass, restricting access to large shopping malls from mid-August to the end of September,” Carrefour said.

The grocer said rising commodity prices have had limited impact so far, thanks to its long-term contracts with suppliers, and that it doesn’t expect inflation to have a material effect on the business this year. Carrefour stuck to a previous goal to generate free cash flow for 2021 above 1 billion euros ($1.16 billion).

France is a crowded market, with at least six major national players, alongside German discounters Lidl and Aldi and online-focused new ventures. That’s made it highly price-competitive, and profit margins are razor-thin.