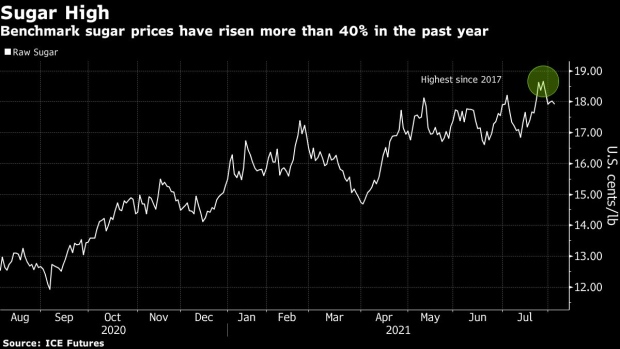 Workers load a bundle of sugarcane onto a truck while harvesting the crop in the Jalana district of Maharashtra, India, on Tuesday, March 23, 2021. 2021. India, the world’s second-biggest producer and grappling with massive stockpiles, is set to miss its goal for sugar exports this year because of a late start to shipments and logistical challenges, potentially providing further fuel to the sweetener's blistering rally. , Bloomberg

(Bloomberg) -- India is pushing for more cars to run on ethanol made from sugar, a move that risks raising the cost of the sweetener globally.

The government will fast-track an ethanol program that will divert as much as 6 million tons of sugar toward fuel production annually by 2025, according to the food ministry. That’s almost the entire amount that India, the world’s second-biggest producer after Brazil, currently exports to the global market.

For the rest of the world, the move may be the biggest change in years for the sugar industry and could drive a bull market, according to Czapp, Czarnikow’s new portal for agri-food analysis. Prices have soared to the highest since 2017 amid a supply crunch, partly due to wild weather in Brazil. A further surge will add to food inflation risks, with global food costs already near a decade high.

It’s “good news for the world if India diverts sugar to produce more ethanol as it will reduce the global surplus,” said Rahil Shaikh, managing director of Meir Commodities India Pvt, a trading company. “But eventually if there is higher demand, some countries including India will have to expand cane acreage.”

To meet its 2025 target, India will have to almost triple ethanol production to about 10 billion liters a year, according to the country’s oil secretary Tarun Kapoor. This will require $7 billion of investment and the challenge would be to create the kind of capacity needed in a short span of three to four years.

The government is offering financial support to sugar mills to set up or expand distilleries. Companies including Balrampur Chini Mills Ltd. will stop producing sugar at some mills and begin processing cane juice to make ethanol instead.

India is pursuing a similar strategy to Brazil, which has promoted sugarcane-based ethanol for more than 40 years to ease its sugar glut, cut dependency on oil imports and increase energy security. Today, Brazil owns the largest fleet of flex-fuel cars that can run on any blend of ethanol and gasoline.

India will allow production of ethanol-based flex engines too, the Press Trust of India reported. Higher use of biofuels in transport can ease India’s economic burden from high crude prices and help the third-largest oil importer save $4 billion annually, according to government estimates.

“They will kill two birds with one stone,” said Michael McDougall, the New York-based managing director of Paragon Global Markets. “It is a move in the right direction.”

The plan will also cut India’s sugar export subsidies by about $500 million. The government helps cash-strapped mills to boost shipments as a way to support local prices and increase export competitiveness. Rivals including Brazil and Australia have complained about the subsidies to the World Trade Organization.

This year, India is set to export a record amount of sugar again with the help of subsidies. Volumes are forecast at 6.5 million tons.

“The surplus will be small after 2025 and the need to export will not remain at such high levels,” said Abinash Verma, director general of Indian Sugar Mills Association. “Depending on domestic and global prices, there may still be small quantities of exports,” he said, declining to give a forecast.