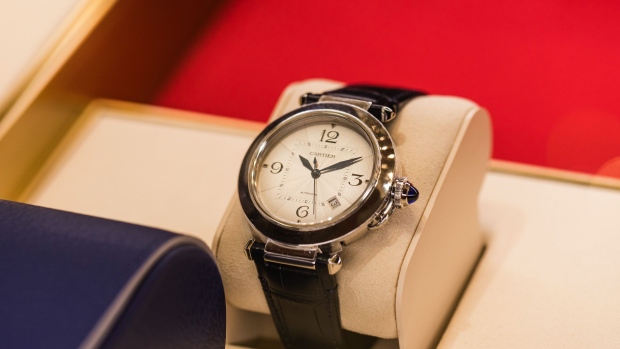 An employee prepares for customers at the Cartier concession, a unit of Cie. Richemont SA, at the Watches of Switzerland Group Ltd. flagship retail store on Regent Street in London, U.K., on Thursday, May 2, 2019. Watches of Switzerland, the U.K.'s biggest seller of luxury timepieces, said it's considering an initial public offering in London that could help fuel expansion into the U.S. market. , Bloomberg

(Bloomberg) -- Cartier, the French maker of upscale watches and jewelry, plans to open as many as 10 stores in the US in the coming years -- another sign that European luxury brands are betting American demand will remain robust.

The company, owned by luxury conglomerate Richemont, is likely to turn a temporary shop in Palm Beach, Florida, into a permanent one, Cartier’s North America Chief Executive Officer Mercedes Abramo said during an interview. It’s considering permanent stores in other cities, such as Seattle, Austin, Texas, and Troy, Michigan, and may add second or third locations in cities where it already operates. For example, it’s opening a new store in New York’s SoHo district in early 2023.

“We need more square footage because the traffic is so high,” Cartier Chief Executive Officer Cyrille Vigneron said during the interview, which was held in Cartier’s recently renovated New York City flagship store. Cartier currently has 30 US stores, and Vigneron said the luxury house could have as many as 40 within the next half decade or so.

A US surge in demand for luxury handbags, watches and other goods during the pandemic has led European luxury firms to pay more attention to the country’s consumers. Previously, brands had mostly focused on key cities such as New York, Chicago and Los Angeles. That’s now changing as the pandemic sparks population shifts and US hedge funds and tech firms migrate to Texas and Florida.

In the past two to three years, Cartier has seen “a growing appetite from American customers for high-end products,” Vigneron said. The company has grown quickly and “we have to adjust to that size and probably continue to expand.”

The US expansion is part of Cartier’s bigger move to increase its 270 stores around the world by about 10% during the next five years. The company is opening new stores and taking over locations operated by franchisees while also refreshing the look of existing stores.

The pandemic, which sparked rapid shifts in consumer behavior, has also bolstered online sales for luxury brands. US e-commerce now represents 10% of Cartier’s revenue in the country -- making it the company’s largest market for online sales. Globally, e-commerce represents about 8% of Cartier revenue, up from just 1% in 2019.

A recent deal between Richemont and online luxury retailer and technology firm Farfetch Ltd. will help to boost online sales further and improve inventory management, Vigneron said. Farfetch’s e-commerce platform will make it easier for Cartier to offer options such as in-store pickup for online orders, for example.

While US demand is robust, economic uncertainty makes it difficult to project what the upcoming holiday season will look like, Vigneron said. “The prospect doesn’t seem to be a full recession, it’s more a deceleration of growth,” he said. “Even if it happened, I think it will not last very long.” US consumers tend to bounce back quickly, he added.