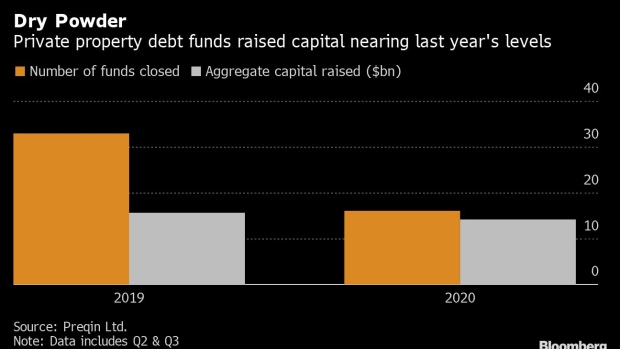 (Bloomberg) -- Real estate debt investors are stockpiling cash, searching for opportunities to lend to commercial-property owners hurt by the pandemic.

Property debt funds, including at Blackstone Group Inc., raised $14.1 billion from April through September, compared with $15.7 billion a year earlier, according to research firm Preqin Ltd. Yet the expected flood of deals has so far been just a trickle.

Now there are signs of a thaw. On one side, competition is building to put that cash to work, motivating some lenders to take on higher risks. On the other, borrowers are growing desperate as loan extensions start to expire on malls, hotels and even some offices that are still struggling as Covid-19 continues to ravage the U.S. economy.

“If you’re willing to do it, you’ll get a lot of deals, but you have to be willing to play in those sectors and take some risks,” said Mark Fogel, chief executive officer of Acres Capital LLC, a New York-based commercial property lender. He said he’s getting almost twice as many calls from borrowers looking to refinance their debt or get bridge loans to stay afloat than just a few months ago.

Debt fund investors are eager to see returns seven months after the coronavirus threw commercial property markets into disarray. When bank lending starts to dry up, investors looking for better yields tend to turn to private credit, which steps into the vacuum.

“So much money has been raised and most was raised for distressed returns but there hasn’t been much distress,” said Dave Karson, vice chairman at brokerage Cushman & Wakefield. “It gets expensive to not invest money that you’ve raised.”

Commercial-property transactions plunged during the pandemic, with retail and hotel properties hit particularly hard by social distancing. That has banks and other major lenders taking a cautious approach, even as activity starts to pick up a bit.

Still, major firms are ready to pounce. Blackstone, one of the world’s largest real estate lenders, closed an $8 billion property-debt fund in September, its largest ever. That added to its growing pile of cash.

As a top global lender, the business can also be more selective, focusing on larger, high-quality deals, he said. Its debt fund will consider everything from industrial financing to hotel loans in attractive coastal markets, Pollack said. Blackstone recently lent $110 million on a newly purchased office complex in Culver City, California.

“It’s a little bit early to have a strong view just given how much disruption to the flow of people and the flow of capital that’s happening with Covid,” Pollack said in an interview. “It will take some time to see how that plays out and we’ll be cautious in the intervening period.”

So far, lenders have been drawn to safer bets like refinancing office buildings with long-term tenants or warehouses leased to Amazon.com Inc., which have have gotten a boost as shoppers avoid brick-and-mortar stores. But competition has been fierce for the small pool of attractive deals, pushing pricing beyond pre-Covid levels in some cases.

“Some lenders are willing to take more risk at very low rates in those segments because of the euphoria around industrial right now,” said Josh Zegen, co-founder of Madison Realty Capital, a mid-market lender that has raised more than $900 million since March.

Madison Realty has been drawn to apartment buildings. The company considers multifamily properties safer than hotels or retail because there’s more transparency around rent payments and liquidity in the market. And there’s less competition for the deal than with industrial properties, Zegen said.

Madison recently closed a $173 million construction loan for a rental building in Manhattan’s Chelsea neighborhood that’s just a few blocks away from Hudson Yards, where finance and tech firms have signed leases for office space.

Blackstone is also open to construction lending. With all the uncertainty around the market changing quickly, a key challenge now is narrowing the gap between borrowers and lenders, Pollack said.

And while that price gulf could persist, a flood of distressed deals is widely expected to hit the market in coming months as lenders run out of patience. That will create opportunities for real estate investors.

“I’m starting to see lenders just wanting to get paid off, so they’re going to borrowers, saying forbearance is over, time’s up,” Fogel said, the Acres CEO. “You’ll start to see a lot of that start to happen this last quarter of 2020, heading into 2021, especially on retail and hospitality assets.”