Investors seeking shelter from the stock selloff that’s dragged on all year have found a home in cash-rich companies.

Take the Pacer US Cash Cows 100 ETF (ticker COWZ), whose assets under management have risen to US$5.6 billion from US$1.3 billion at the start of 2022. The fund, which tracks mid- and large-cap companies with high free-cash-flow yields, has seen an inflow every week so far this year, data compiled by Bloomberg show. Through Monday, it was up 2.3 per cent year to date, compared with the S&P 500’s nearly 17 per cent loss.

“If growth is slowing, then cash flow becomes more valuable,” Ellen Hazen, chief market strategist and portfolio manager at F.L.Putnam, said by phone. “The market is rewarding companies that have cash flow. And companies that don’t have cash flow, which we would term low-quality value, are beginning to underperform; and we think that’s likely to continue.”

COWZ counts a number of energy firms among its largest components, including Valero Energy Corp., Occidental Petroleum Corp., Phillips 66 and Exxon Mobil Corp. Energy is one of the only sectors to post positive returns this year. Plus, Hazen says oil companies have over the last decade “responded to investors’ persistent insistence that they return cash to shareholders and not spend their cash flow on capex,” she said. “That means that we have under-invested in oil, which helps to lead to a higher oil price, but it also means that those companies do have much more free cash flow.” 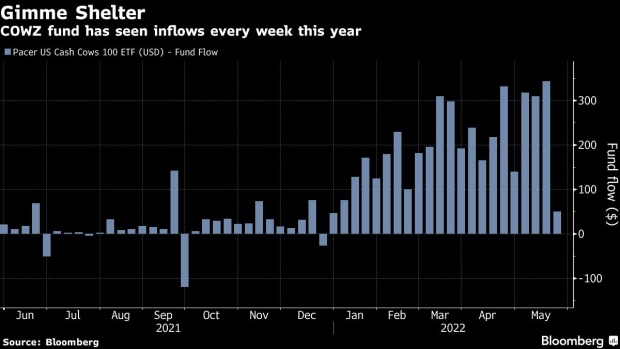 The cash-flows ETF stands out in a market plagued by persistently high inflation, one in which very few investments have worked. Stocks, bonds and crypto have all suffered this year amid the Federal Reserve’s interest-rate hiking regime, which has hurt speculative corners of the market in particular.

Investors are focused on companies with strong fundamentals, which typically means firms that have positive earnings and cash flows, according to Shawn Cruz, head trading strategist at TD Ameritrade. “If that’s an indication they’re focused on fundamentals and quality, that makes sense,” he said by phone. “At the other end of that are just companies that are burning cash, won’t be profitable anytime soon. Those are the first ones to get taken out.”

Elsewhere, the Pacer Global Cash Cows Dividend ETF (GCOW) has also seen interest, with the dividend-focused fund taking in cash every month so far this year for a total haul of roughly US$283 million. That puts it on pace for its best year on record, Bloomberg data show.