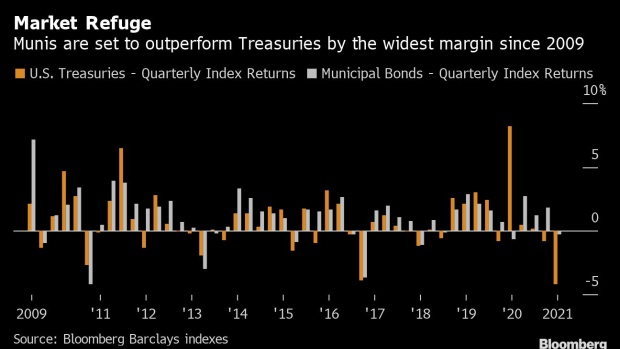 (Bloomberg) -- Mom and pop investors are helping the municipal-debt market stand firm in the face of broader fixed-income pain in 2021.

State and local debt is poised to outperform U.S. Treasuries by the most in any quarter since 2009, according to Bloomberg Barclays indexes. While municipals have been pressured by the selloff in Treasuries -- they’re on pace for a 0.3% quarterly loss -- the flood of cash coming in has helped the market avoid a major slump. Treasuries, in comparison, are down 4.2%.

Muni funds have pulled in a net $26.18 billion this year through the week ended March 24, according to Refinitiv Lipper data that include municipal exchange-traded funds. State and local-debt ETFs alone are poised for their second-best quarter of inflows on record, reaping about $5.1 billion this year, according to Bloomberg Intelligence data. Meanwhile, there’s been an outflow of around $1.3 billion from government-focused ETFs during the period, mainly consisting of Treasuries, the data show.

Bonds have tumbled in 2021, driving Treasury yields to the highest in more than a year, amid expectations for a rapid economic recovery. But the money flowing into state and local debt is providing a cushion. Barclays Plc strategists said in a March 26 note that mutual funds’ large “cash buffers” would likely limit a selloff, because the funds are ready to step in and start buying if yields rise to more attractive levels.

“We’ve had such ridiculously high fund inflows,” said Peter Block, head of municipal strategy at Ramirez & Co., who said he expects the demand to continue.

The bonds are luring investors because of their status as a haven where defaults are rare. They also pay interest that’s tax-free, which is appealing at a time when the Biden administration is discussing tax increases. It also helps that wealthy Americans -- some of the core buyers of municipals -- have grown richer during the pandemic, which could be driving some of the demand.

“There’s a lot of money that needs to be put to work,” said Jason Ware, managing director at 280 CapMarkets. The influx of cash has meant that new deals are being gobbled up in the primary market and there are few sellers, Ware said.

When municipals do see short periods of underperformance, investors are jumping in, he said.

“It seems like buyers are kind of waiting to pounce on any of that,” Ware said.