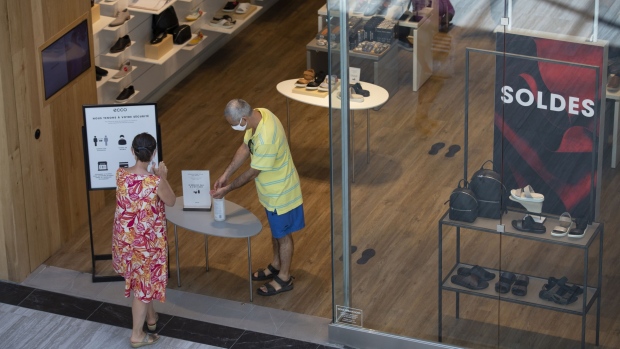 Shoppers wearing protective masks use hand sanitizer at a shoe store in a mall in Montreal, Quebec, Canada, on Saturday, July 18, 2020. Bloomberg/Christinne Muschi

Canadians’ improving financial health is stoking optimism about a sharp economic recovery once the pandemic is over.

That’s one takeaway from top bank economists at the annual outlook conference hosted by the Economic Club of Canada. In a virtual panel Thursday, the unprecedented increase in household wealth last year was seen as a key catalyst for growth in 2021.

In the midst of a deep economic crisis, Canadians became significantly richer from massive income support payments, surging home prices and stock market gains. Household net worth rose by more than $600 billion in the first six months of the pandemic, according to Statistics Canada data.

“During the first year of a recession there is just no precedent for a positive wealth effect,” said Stefane Marion, chief economist at National Bank of Canada in Montreal. “This is crucial in helping sustain the resilience of the Canadian economy.”

According to a Bloomberg survey of economists last month, growth is seen surging to an above 5 per cent annualized pace in the final nine months of this year.

In the early days of the pandemic, Prime Minister Justin Trudeau’s government acted quickly to implement income and credit support programs to keep businesses and households afloat. As a result, average disposable income increased by 12 per cent during the pandemic, according to Marion.

This was complemented by the Bank of Canada cutting interest rates to record lows, and committing to keeping them there for years to support the recovery. The coordinated action has resulted in higher savings rates and lower debt-to-income levels for the average Canadian.

“With this type of money going to households we avoided a wave of insolvencies and defaults that has characterized every recession in Canadian history,” Marion said.

The expectation is that when a majority of the population is vaccinated, consumers will go on a spending spree.

“Give us the vaccine and get out of the way because people are dying to go to restaurants again, they just aren’t willing to die to go to a restaurant,” said Avery Shenfeld, chief economist at Canadian Imperial Bank of Commerce. “Once people have their vaccine I think we will see a huge unleashing of pent up demand.”

Economists acknowledge there is a cohort of consumers that have been left out. Lower-waged workers, particularly in service industries where jobs losses are more pronounced, have been hardest hit and benefited least from the pick up in wealth.

“There’s a real divergence there, and of course that’s going to leave some behind,” Wright said. “That’s a challenge for policy makers as well as the businesses as we move forward.”