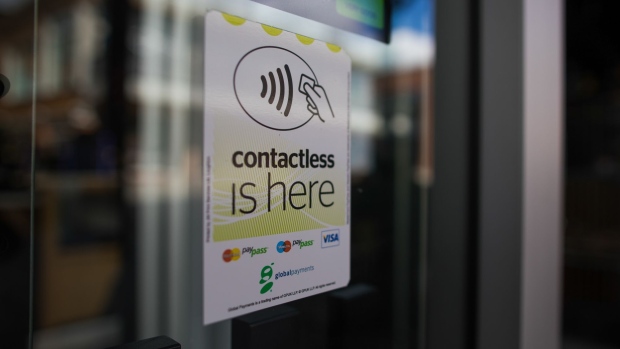 A contactless payment sticker sits displayed in the window of a restaurant in Norwich, U.K., on Tuesday, June 9, 2020. With the economy on course for its deepest recession for at least a century, the government is now paying the wages of more than 10 million workers to stave off mass unemployment. Photographer: Chris Ratcliffe/Bloomberg , Bloomberg

Cash is disappearing from the U.K. economy, a Bank of England official said in building the case for a new form of digital currency backed by the government.

The central bank’s Deputy Governor Jon Cunliffe said that technology including the internet and the popularity of credit and debit cards are reducing the role cash played in transactions. Authorities, he said, will have to adapt to keep some sort of state-backed money prominent in the financial system.

“Central bank state-issued money is disappearing,” Cunliffe said on “The Swap” podcast from the International Swaps and Derivatives Association. “It’s no longer a full service settling assets. There are places in London where you can’t use it in face-to-face transactions.”

The remarks are part of an effort by policy makers to build backing by politicians and consumers for a new form of money that could be as secure as cash but as flexible and useful online as cards and crypto currencies.

The BOE and Treasury along with other central banks around the world are studying whether to adopt a “central bank digital currency” that would stand alongside cash. Unlike deposits in banks, CBDC would carry the explicit backing of the government. It would be designed to work with online payment platforms and to evolve along with technology.

Cash was the dominant way transactions were settled in the U.K. until 2016 and since has slipped behind cards and other forms of payments, a BOE discussion paper showed in July. The pandemic accelerated that trend.

“These technological developments won’t stop just because we don’t provide a CBDC,” Cunliffe said. “Cash is going to disappear, and the question is going to be what role can a CBDC play.”

He said that people think of money as pound coins or dollar notes, and that they need the safety of a government-backed currency in times of stress. CBDC could perform the same role as cash without requiring consumers and businesses to handle the bulk of paper bills.