This is a very asymmetrical crisis: CIBC economist Benjamin Tal

Even as Canadian policy makers ramp up COVID-19 restrictions, economists are becoming more optimistic about the country’s outlook.

Strong fiscal support, the start of vaccinations and a growing pile of savings in consumers’ accounts have caused forecasters to revise their views of Canada’s recovery. Economists surveyed by Bloomberg this month see output expanding by an average 5.4 per cent annualized in the final three quarters of 2021, much higher than the 3.8 per cent forecast in November.

Eric Lascelles, chief economist at RBC Global Asset Management, said in a report to investors last week he’s among those raising growth forecasts, citing “our belief that vaccines will prove a game-changer, and expectations that government stimulus will remain substantially in place.”

Canada has proved itself a fiscal champion during the pandemic, with the most generous emergency response in the Group of Seven, according to International Monetary Fund data. The longer-term implications of such massive deficit spending are unclear, but it has left the country well-positioned for a strong 2021 rebound, mostly on the potential upside from consumption when vaccines roll out and restrictions lift.

“In the case of a permanent reopening starting toward the end of the second half of 2021, the elevated household savings rate could unleash major pent-up demand, especially on the services side of the economy,” Dominique Lapointe, an economist at Laurentian Bank Securities, said by email.

Generous government support and limited spending options have been a boon to Canadians’ personal checking accounts, which have swelled over the past year by $103 billion, or 34 per cent, the most in more than three decades, according to Bloomberg calculations based on Bank of Canada data. 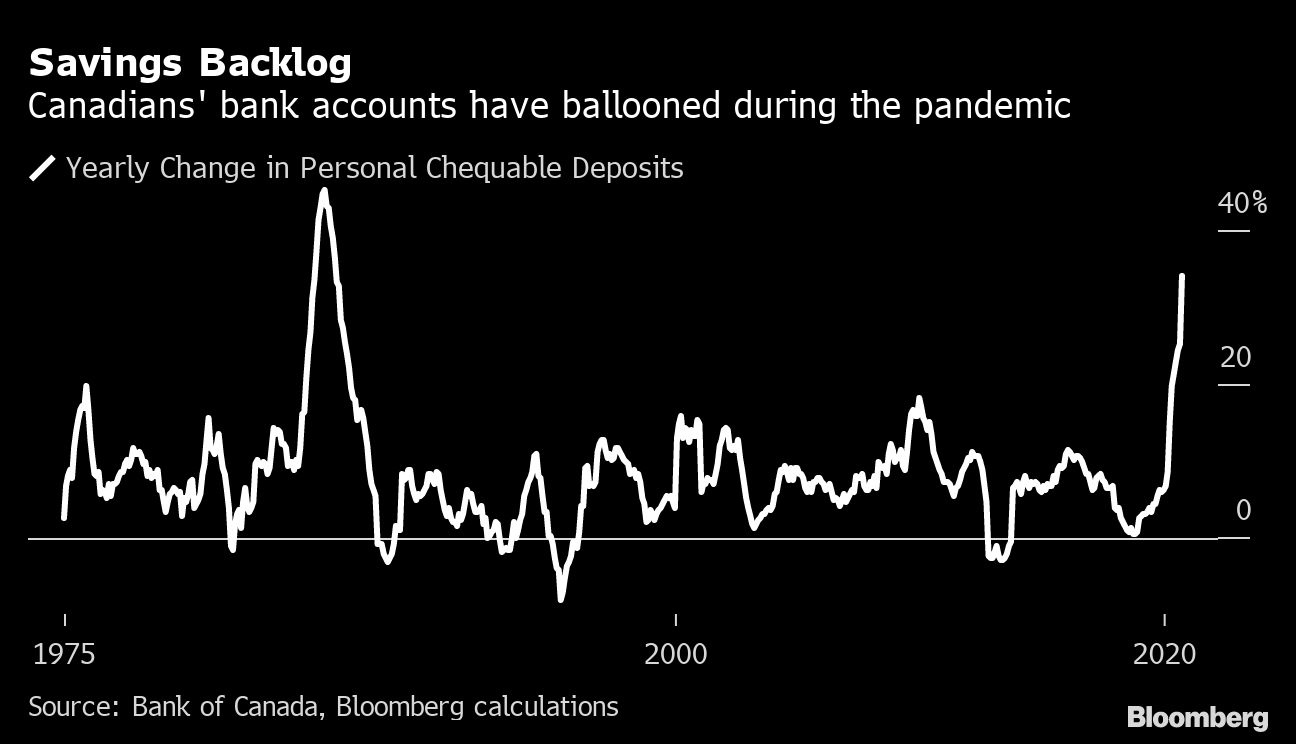 Canada’s outsized fiscal support relative to peers and progress on vaccine distribution “could drive a stronger-than-expected recovery later in the spring. ... We do not see a rate hike until 2023, though risks could tilt toward speculation of an earlier move.”

“People in many cases were getting more support than they needed in the early going and so they saved that,” Lascelles said by phone. “As the fiscal support starts to fade or as they lose eligibility for certain programs, we will start to see them tapping that.”

Still, the virus is hampering the near-term outlook, with new cases of coronavirus in Canada surpassing 6,600 a day on average -- more than triple what was seen during the first wave in April and May. Ontario, the most-populous province, said Monday it will enter a new lockdown the day after Christmas, the latest in a series of tighter measures across the country.

But Prime Minister Justin Trudeau’s government is pushing to inoculate as many Canadians as possible before the end of the year, securing more than 400,000 early doses of two COVID-19 vaccines. That’s boosted consumer confidence, which has climbed back to where it was in mid-March when restrictions were first imposed.

Economists in the latest Bloomberg survey lifted their 2021 and 2022 full-year growth forecast to an average of four per cent, from 3.9 per cent in November.

Canada’s output gap will close around the middle of 2022, with inflation returning to the two per cent target in the third or fourth quarter of that year, “even without incorporating much of a vaccine lift,” according to projections by Bank of Nova Scotia economist Derek Holt.

While he acknowledges wide ranges are still possible, Holt expects such a scenario would prompt the Bank of Canada to shut down its quantitative easing program by late 2021 or early 2022 and begin tapering before that.

“That makes the assumption they’ll prepare markets over time and still speak to bidirectional flexibility as they taper, but that they won’t just go cold turkey,” he said by email.