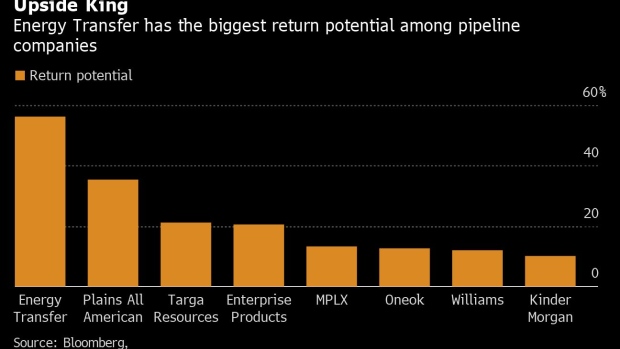 The company owned by billionaire Kelcy Warren is seen reporting a record annual profit next month, boosted by sales of natural gas at skyrocketing prices during last February’s Texas freeze. The largest U.S. pipeline operator also signaled more cash will soon be returned to shareholders via dividends and buybacks as it has slashed debt following a decade of expansion.

The Dallas-based company, which operates more than 114,000 miles (183,000 kilometers) of pipelines across North America, trades at a discount to major rivals. Energy Transfer’s enterprise value is at 7.7 times the company’s forecast earnings before items such as taxes and interest. That compares with 10 times for Kinder Morgan Inc. and 9.6 times for Enterprise Products Partners LP.

Analysts are targeting a share price for Energy Transfer that is 55% above current levels, the biggest upside in the industry, according to data compiled by Bloomberg. The stock has risen about 12% this year, trailing an almost 16% gain in the S&P 500 Energy Index.