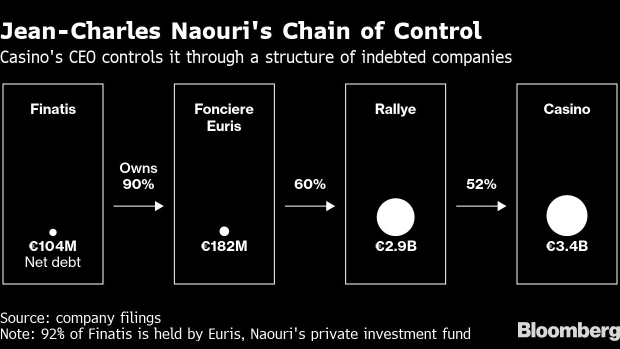 A shopper enters a Casino Guichard-Perrachon SA supermarket in Paris, France, on Tuesday, Oct. 23, 2018. Hedge funds hired a lawyer to argue that French grocery magnate Jean-Charles Naouri’s stake in Casino Guichard-Perrachon SA is valued too highly on the books of his holding company, intensifying the battle between the French billionaire and short sellers. Photographer: Marlene Awaad/Bloomberg , Bloomberg

(Bloomberg) -- Jean-Charles Naouri secured six months of reprieve from creditors of the firms through which he controls Casino Guichard-Perrachon SA -- but his grip on the French retailer is slipping.

Naouri’s multi-tiered network of holdings, each one weighed down by debt and padded by minority backers, allows him to control Casino -- which has a 3.3 billion-euro ($3.7 billion) market value -- using only a 200 million-euro equity stake.

The companies will attempt to restructure their debts, including 2.9 billion euros owed by Casino parent Rallye SA, the companies said Thursday. But while negotiating with banks buys time, the 70-year-old Naouri will still come under pressure to give up his roles as chairman and chief executive officer.

“Ultimately we expect a change of management,” Bernstein analyst Bruno Monteyne said in a note. In the meantime, “Expect Mr. Naouri to do everything to stay in charge.”

The complicated structure dates back to the early 1990s, a period when French entrepreneurs like Naouri, Bernard Arnault and Francois Pinault staged splashy takeovers with relatively little in the bank.

A math whiz who was educated at Harvard as well as elite French universities, Naouri has kept Casino afloat in the country’s highly competitive retail sector via opportunism and financial acumen. He was quicker than rivals like Carrefour SA to sense the declining relevance of so-called hypermarkets and moved to cut Casino’s exposure to the big-box stores whose catch-all assortments including Christmas decorations and soccer cleats have struggled to compete with rising e-commerce providers like Amazon.com Inc.

In addition to France, where Casino owns the Monoprix chain, the company operates stores in markets like Brazil and Colombia, where it has also faced challenges amid economic turmoil.

Even during lean years when Casino and its parent companies were building up debts that now amount to more than $10 billion, the supermarket company kept paying hefty dividends that allowed Rallye to pay off creditors. Casino recently sold off 1.5 billion euros in real estate and has earmarked another 1 billion euros’ worth for disposal.

The departure of Naouri “is the only way for Casino to come out stronger and to prevent further asset stripping,” Fabienne Caron, an analyst at Kepler Cheuvreux, wrote.

Analysts expect Naouri to reschedule the holding companies’ debt over as much as 10 years in a bid to maintain control. That “would be strongly negative for Casino,” Caron said. “It would imply increasing pressure to pay dividends over time, while the company is already struggling to deliver on free cash flow.”

If creditors want to stop dividend payments from flowing to Rallye, they could require the holding company to ease its grip on Casino as a condition of any restructuring. Then Naouri could get sidelined.

A change at the top, however, would hardly be a panacea in France’s crowded retail sector, where hypermarkets, convenience stores, hard discounters and thousands of click-and-collect centers vie for customer spending. Shares in larger rival Carrefour, for example, have fallen 25% since a new CEO took over in July 2017.

A new chief at Casino could also lead to negative surprises if short-sellers’ claims that Naouri is masking the company’s true financial position turn out to be true.

“When management changes, we expect restated profitability accounts,” Bernstein’s Monteyne said. “The new management will need time to find out the true position of the company and that period of uncertainty will weigh very heavily on the share price of Casino.”

--With assistance from Albertina Torsoli and Luca Casiraghi.

To contact the reporters on this story: Robert Williams in Paris at rwilliams323@bloomberg.net;Thomas Mulier in Geneva at tmulier@bloomberg.net