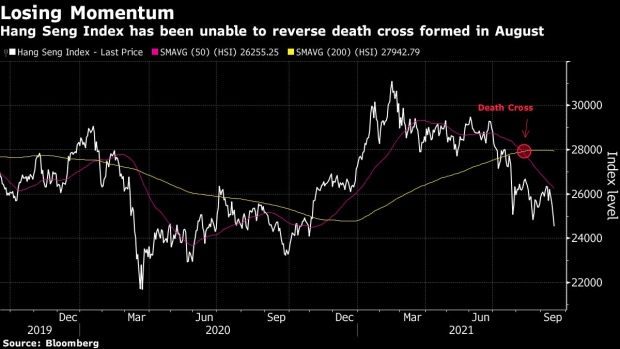 Taxis wait for customers outside Venetian Macao casino resorts, operated by Sands China Ltd., a unit of Las Vegas Sands Corp., in Macau, China, on the early morning of Wednesday, Feb. 5, 2020. Casinos in Macau, the Chinese territory that's the worlds biggest gambling hub, closed for 15 days as China tries to contain the spread of the deadly coronavirus. , Jeanny Yu and Chloe Lo

(Bloomberg) -- Chinese stocks suffered their worst week in a month as Beijing’s move to tighten the screws on Macau casinos and fears of a potential collapse of China Evergrande Group underscored the risks of investing in the nation’s equities market.

A soft rebound on Friday was small consolation for investors, with Hong Kong’s Hang Seng Index and the mainland’s CSI 300 gauge still ending the week down more than 3% each. The HSI is trading near the lowest level in almost a year and few more down days could put the CSI in the same position.

“Risks are skewed to the downside amid the double whammy of macro weakness and regulatory uncertainty,” Morgan Stanley strategists including Laura Wang said in a research report. The Wall Street bank cut its targets for the HSI and Hang Seng China Enterprises Index by 4% while noting the difficulty in quantifying the impact of Beijing’s crackdown.

Traders had just started to wade back into the waters and look for bargains, betting that the worst of China’s regulatory crackdown may be over. Instead, what they got was Beijing unveiling a new round of measures on the gambling sector that wiped out nearly $20 billion in market value and fears of contagion from Evergrande’s debt crisis hitting property and banking sectors.

Sands China Ltd. tumbled more than 40% this week, leading declines among Macau casino operators, after the government said it was looking at appointing representatives to “supervise” the businesses. Authorities are also considering boosting local shareholdings and tightening controls on the distribution of dividends.

The renewed scrutiny added pressure to the gambling hub already struggling with years of slowing growth and hit by the Covid-19 pandemic. Bloomberg’s index of the six casino operators in the gambling enclave posted a 31% drop this week.

Despite perennial hopes for a rebound, the HSI is still among the world’s worst-performing primary indexes this year, this quarter and this week.

“There’s maybe been a feeling at the start of September that some of the pace of regulatory action has calmed down,” said James Cordwell, analyst at Atlantic Equities LLP. But events in recent days “reminded investors that the government still sees plenty of work to be done in tightening up regulation,” he said.

Meanwhile, pressure is growing on the government to head off systemic risk by helping to restructure Evergrande’s $300 billion pile of liabilities.

Worries that other Chinese property developers may run into similar financial troubles as Evergrande intensified after a unit of the indebted company said its onshore bonds were suspended from trading on Thursday.

Amid the uncertainty, the HSI’s property sub-index tumbled 8% this week, its worst performance since March 2020.

Technology stocks managed to outperform the wider market Friday but also ended well down for the week, with the Hang Seng Tech Index dropping 4.4%.

Negative news continued to hang over the sector, including a Financial Times report that the government plans to break up Ant Group Co.’s Alipay lending business. Government calls for better protection of gig-economy worker’s rights also weighed on confidence, along with a renewed call for internet companies to stop blocking links of their rivals.

Alibaba Group Holdings Ltd.’s valuation dropped to a record, a sign that investors are “pricing a more sustained change in its profitability or growth prospects looking ahead,” Michaël Lok, chief investment officer at Union Bancaire Privée, said in a research note on Thursday.

Meanwhile, Tencent Holdings Ltd. briefly lost its place among the world’s 10 largest companies by market value on Thursday, which left no Chinese company in the list.