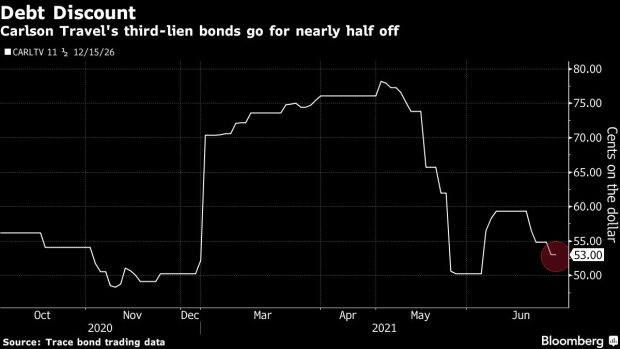 (Bloomberg) -- Credit firms including Caspian Capital and Oaktree Capital Management are considering providing new financing to business travel company CWT as the firm engages in restructuring talks, according to people with knowledge of the matter.

Early talks between Caspian, Oaktree and other potential capital providers have been around ways to assist a group of third-lien bondholders in discussions with the company, the people said. The firms haven’t lent CWT money or otherwise built a position in its debt, but are weighing participating in new financing for the company, said the people, who asked not to be identified discussing a private matter.

No formal offer has been made and any decision will depend in part on the company’s recent financial performance, the people added. Representatives for CWT didn’t return requests for comment, while representatives for Caspian and Oaktree declined to comment.

CWT, which shortened its name from Carlson Wagonlit Travel in 2019, entered into formal talks with creditors after it skipped June 15 interest payments on its bonds, Bloomberg reported. The missed coupons started the clock on a 30-day grace period, and the company is using that time to try to reach a restructuring deal.

Lawyers at Glenn Agre Bergman & Fuentes are providing advice to the creditor group, which is made up mostly of third-lien noteholders that rank lowest in the company’s capital structure, the people said. Another group of higher-ranking bondholders is working with law firm Stroock & Stroock & Lavan, they added.

Privately held CWT coordinates business travel, meetings and events for companies. Prior to the Covid-19 pandemic, it handled around 100 meetings and events daily and corresponded with about 60,000 travelers, according to its website. The Minneapolis-based company has around 15,000 employees and was founded in 1994 through a combination of two travel agencies.

But the Covid-19 pandemic upended the travel industry, with revenues at some businesses plunging to near zero amid global shutdowns. Even with mass vaccinations, business travel isn’t expected to bounce back as quickly as leisure trips, Fitch Ratings wrote in a report downgrading the company to C after the missed debt payments. CWT needs to see its earnings recover to make its debt manageable, which would require more travelers, the credit grader added.

The company’s existing bondholders have discussed ways to support the company as it manages its liquidity shortfalls, including providing new cash to help CWT weather a slow travel recovery, the people said. The capital could come from both the existing creditors and outside parties, they added.

Caspian, based in New York, focuses on lending to troubled companies and has provided rescue financing for companies including Viking Cruises Ltd. and NYC Ferry operator Hornblower Group. Los Angeles-based Oaktree is one of the largest specialists in distressed debt, with more than $37 billion committed to credit from troubled companies.

Both firms are seeking opportunities in a time of shrinking corporate distress. The universe of troubled bonds and loans shrunk to $60.5 billion as of June 18, data compiled by Bloomberg show. That’s compared to a peak of nearly $1 trillion last year.