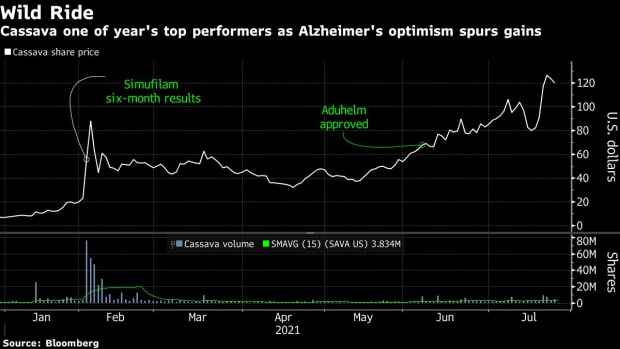 (Bloomberg) -- Another double-digit share price rally could be in store for Cassava Sciences Inc. over the next month, as the biotech vies with retail trading favorites AMC Entertainment Holdings Inc. and GameStop Corp. to be the year’s top performing stock in the Russell 3000.

In the run-up to the big reveal from a mid-stage study, the 23-year old drug developer has sprinted about 1,600% so far this year. On July 29, Cassava is expected to present safety and cognition data from about 50 people with mild or moderate Alzheimer’s disease after they completed nine months of treatment with the experimental medicine, simufilam.

If patients are able to maintain the levels of cognition improvement seen in prior results out to the nine-month mark that could spur another rally, according to analysts who follow the stock. In such a positive scenario, shares could be trade up into the $170 range, Mayank Mamtani, an analyst with B. Riley Securities, said. Cassava fell as much as 5.2% to $113.70 on Tuesday.

Options indicate a similar sized move, suggesting shares could shift 37% in either direction by late August.

Cassava was swept up in the retail trading surge along with now household names that have grabbed the spotlight this year. Biotech investors also recently have been cheered by regulatory advancements for Alzheimer’s disease including the approval of Biogen Inc.’s Aduhelm, the first new drug for the brain ailment in over decade.

A prior analysis after six months showed patients taking Cassava’s medication had a 10% improvement on cognition and 29% improvement on an inventory of dementia-related behavior, like delusions and anxiety. Showing a cognitive benefit has been difficult even for the world’s top drugmakers, including Eli Lilly & Co., Roche Holdings AG and Biogen.

Cassava’s results have helped spark interest in smaller drug developers that target neuroinflammation instead of clearing amyloid plaque in the brain like Lilly or Biogen’s medicines do, according to Jason McCarthy, a Maxim Group analyst. Lilly and Biogen stocks have moved from $10 billion to $20 billion in market capitalization intra-day on updates for their medicines. “That tells you the implied value of an Alzheimer’s drug,” he said.

Cassava’s rally could quickly unravel, too. The worst-case scenario would be if patients saw levels of cognition fall below where they were when they started the study. B. Riley’s Mamtani said the stock could plummet to around $51 in that case.

The study is open-label, meaning there will be no placebo arm to compare the results. Late-stage placebo-controlled trials are expected to start in hundreds of patients later this year.

”Stock prices may be transient, but data is permanent. For Cassava Sciences, success is ultimately driven by data. May Thursday’s data do the driving, and the talking,” Remi Barbier, Cassava’s founder and chief executive, said in a statement by email.