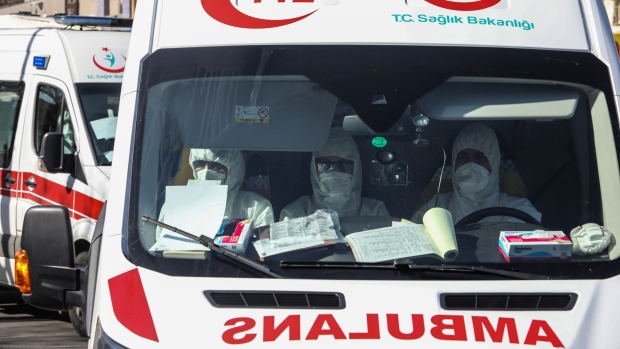 Health personnel wearing protective gear ride in an ambulance carrying passengers and crew of a Turkish Airlines plane from Tehran as they are taken to Dr. Zekai Tahir Burak Hospital for a 14-day quarantine and to be tested for possible coronavirus infection on February 25, 2020 in Ankara, Turkey. , Photographer: /Getty Images

(Bloomberg) -- The World Health Organization says the coronavirus isn’t yet a global pandemic. Bonds that insure against just such a catastrophe say that it probably is.

The bonds, sold in 2017 by the World Bank to raise money for poor countries in a global pandemic, are quoted as much as 40% below their face value following coronavirus outbreaks in countries such as Iran and Italy, according to investors who own the securities.

The riskier of two tranches of the securities, amounting to $95 million, would change hands for between 60 cents and 70 cents on the dollar, the investors said, asking not to be named because the information isn’t public. The safer $225-million portion is marked at just under face value.

That’s not the furthest they have fallen. During an outbreak of the Ebola virus -- identified in the bond’s terms as a “covered peril” -- in the Democratic Republic of Congo last year, they reached levels as low as 40 cents.

See also: Investors Cash In on Ebola Bonds That Haven’t Paid Out

There is no exchange-based market for the notes and investors have to rely on the quotes offered by a handful of dealers. These prices reflect the probability of bondholders taking losses if Boston-based private company AIR Worldwide Corporation determines a trigger event has occurred. Officials at the firm weren’t immediately available to respond to a request for comment.

The bonds are structured so that their principal, or face value, is written down following outbreaks of certain diseases named as covered perils. They were issued to raise funds for the World Bank’s Pandemic Emergency Financing Facility, which sends money to developing countries that need help tackling these diseases. To date, the pandemic securities have not been triggered.

However, these bonds have faced criticism for the long list of terms that need to be met before investors take losses, ranging from the geographical spread of the disease to a positive growth rate of the infection.

Nevertheless, the bonds pay fat coupons to compensate holders for these risks, even if they are unlikely to occur. The riskier notes pay more than 11% over 6-month Libor.

To contact the reporter on this story: Tasos Vossos in London at tvossos@bloomberg.net

To contact the editors responsible for this story: Vivianne Rodrigues at vrodrigues3@bloomberg.net, Chris Vellacott