The world’s largest maker of mining and machinery equipment reported the first decline in quarterly profit in almost three years. The Deerfield, Illinois-based company said sales fell 5.2 per cent and it expects demand to be flat in the fourth quarter.

“When there is global uncertainty, uncertainty in the economic outlook, they probably defer making those decisions,” Chief Financial Officer Andrew Bonfield said in a telephone interview, referring to the company’s end-users. “Our customers are not facing financial difficulties. It’s more that they seem to be waiting to see what happens with the economic outlook for making decisions.” 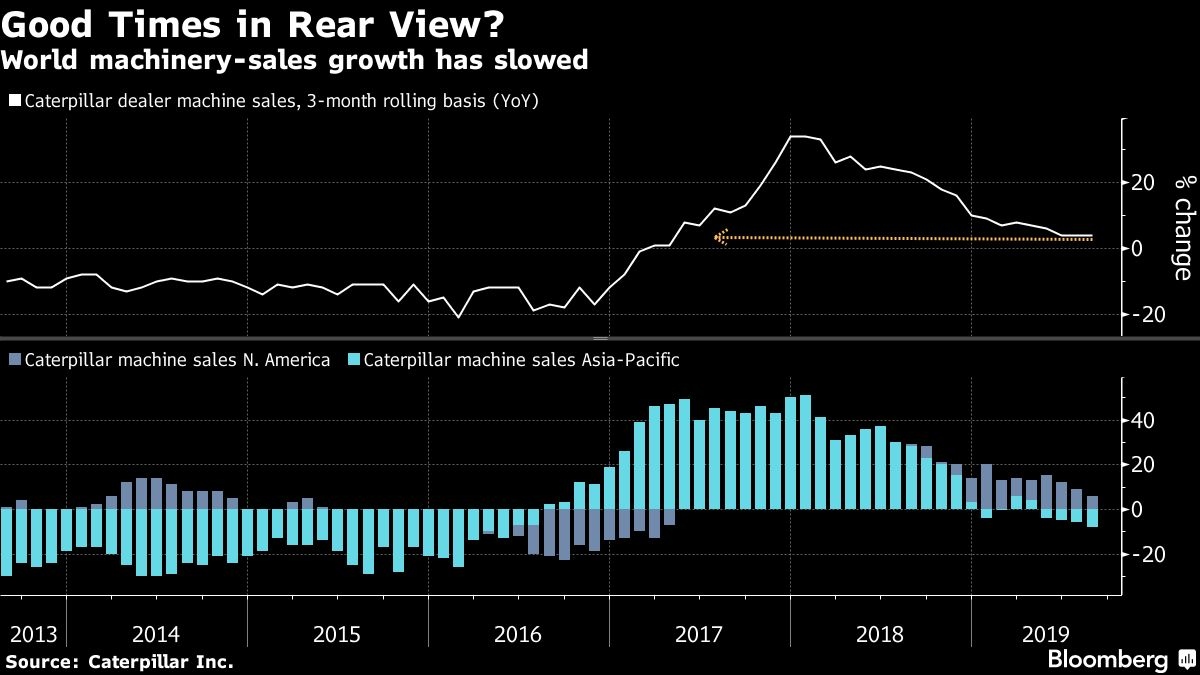 The profit outlook suggests the deterioration in Asia that the company flagged in July has worsened. Caterpillar said at that time that it was counting on dealers to work through an inventory buildup to help meet earnings targets, but Wednesday’s results signal the glut remains.

“Our volumes declined as dealers reduced their inventories, and end-user demand, while positive, was lower than our expectations,” Chief Executive Officer Jim Umpleby said in the statement Wednesday. “In the fourth quarter, we now expect end-user demand to be flat and dealers to make further inventory reductions due to global economic uncertainty.”

Caterpillar’s full-year guidance cut, due largely to dealer destocking, is a further sign of weakness within industrial markets and bodes poorly for Moody’s to  convert its positive outlook into an upgrade anytime soon. — Bloomberg Intelligence analyst Joel Levington

The company said third-quarter earnings fell to US$2.66 a share, trailing the US$2.87 average estimate of analysts. Revenue in the period slipped to US$12.8 billion from US$13.5 billion a year earlier.

Machine sales growth at the economic bellwether has slipped in Asia and the U.S. on weaker orders in construction industries, just as the company has been trying to raise prices.

The report comes a week after the International Monetary Fund cut its 2019 global growth forecast to a decade low, citing a broad deceleration across the world’s largest economies as trade tensions undermine the expansion.

For the individual units:

• Mining total sales were $2.31 billion in the third quarter of 2019, a decrease of $327 million. Many analysts have looked at the segment as a business that would be growing as some other sales would be slowing.

• Oil and gas-related revenue was down 9% in the quarter. Caterpillar cited the drop in reciprocating engines, units that are used in fracking. That decline was only partially offset by increased sales of turbines.
For construction, Caterpillar saw North American sales increase but revenue from Asia was hit primarily because of lower demand in China, competitive pressures and dealer inventories.