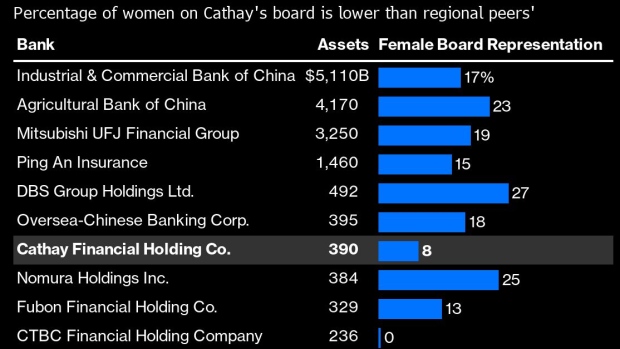 (Bloomberg) -- In a wide-ranging conversation about Cathay Financial Holding Co.’s environmental and social commitments, the president of Taiwan’s largest financial company offered an explanation for the gender imbalance on its own board of directors: He can’t find any women who qualify.

Of Cathay’s 13 board seats, only one is held by a woman, a ratio that puts the company in the bottom quartile of its Asian peers. On average, roughly 15.5% of board seats at financial firms in the region are held by women, according to Bloomberg data.

“We know we need to increase female board members, but we dare not do so if there are no right candidates,” Cathay Financial Holding Co. President Lee Chang-ken said in an interview in Taipei on Jan. 12. “The chairman told me to look for ideal female candidates for independent directors, but I can’t find any.”

Qualified candidates have typically been hired by companies or are working for companies that Cathay is doing business with, Lee added, which disqualifies them until two years after they retire.

That puts the bank out of step with Taiwan’s reputation for progress on gender parity. In addition to President Tsai Ing-wen, about 12.5% of government’s ministries and commissions are led by women, and almost 42% of legislators are female.

In the corporate sphere as well, the two Asian financial firms with the highest percentage of female directors are based in Taiwan. The state-owned First Financial Holding Co. and a brokerage firm President Securities Corp. are led by boards with an equal representation of men and women.

Overall, Taiwan’s corporates lag their global peers. Women hold, on average, 14% of board seats for companies listed on Taiwan Stock Exchange in 2021, less than half the ratio for firms in the S&P 500 index, according to Bloomberg data.

Cathay Financial will elect new board members by June, when the tenure of current directors expires. “We understand the issue, but give us some time to adjust,” said Lee. “Looking forward, I believe the percentage of female executives at Cathay will be higher and higher.”

To be sure, Cathay, Taiwan’s largest financial group by assets, has made efforts to strengthen its ESG endeavors. It has taken part in several global initiatives including Climate Action 100+. It aims to use 100% renewable energy for all its operation sites in Taiwan by 2030, and achieve net-zero emissions by 2050.

Cathay reported a record NT$140.6 billion ($5.1 billion) in net income in 2021, up 85% over the previous year. Its life insurance and banking units also saw profits rise to new highs, fueled by Taiwan’s strong economic growth and financial markets, the company said in a statement January 10. Its banking unit has stopped offering loans to coal-fired power plants, which are also excluded from Cathay Life’s investment targets if they don’t transform actively by using renewable energy.