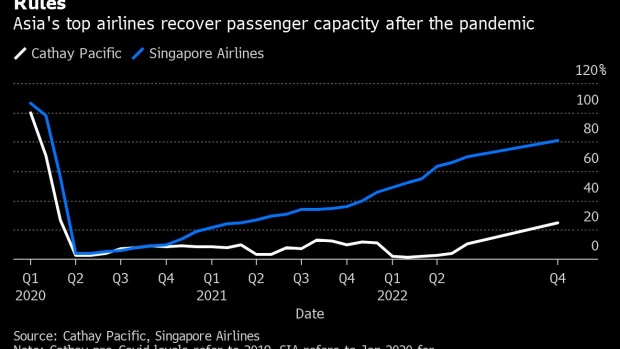 Travelers check in for a Cathay Pacific Airways Ltd. flight in the departure hall at Hong Kong International Airport in Hong Kong, China, on Monday, Aug. 8, 2022. Hong Kong will reduce the period of time people entering the city must spend in hotel quarantine to three days from seven, a bolder-than-expected easing of its strict Covid-19 travel curbs, yet still leaving the Asian financial hub isolated in a world thats mostly moved on from the pandemic. , Bloomberg

While Hong Kong’s main airline said Wednesday its first-half net loss narrowed to HK$5.3 billion ($675 million) from HK$7.9 billion a year earlier, Tang said in an internal staff memo seen by Bloomberg that the financial hub is taking longer than other cities to see a travel recovery.

“It is clear that Hong Kong has fallen far behind other international aviation hubs and that it is taking longer to see a recovery with travel restrictions not yet completely easing,” Tang said in the memo.

While Hong Kong earlier this week announced mandatory hotel quarantine for incoming travelers will be cut to three nights from Friday, Cathay called for a clear roadmap to remove all restrictions.

For more details from the earnings report, click here

Cathay’s outlook is improving after three years of unprecedented challenges -- first Hong Kong’s anti-government protests in 2019 and then the Covid crisis, which has hit particularly hard on an airline completely reliant on international traffic. While Hong Kong’s reopening lags the rest of the world beyond mainland China, the city has been gradually easing some of its pandemic border curbs. News of the easier quarantine requirements have sparked a rush for flight bookings.

“The most recent adjustments to quarantine arrangements for arriving passengers are expected to improve travel sentiment,” Chairman Patrick Healy said in the earnings statement. “This gives us confidence that our airlines and subsidiaries will see a stronger second-half than first-half performance.”

In the depths of the pandemic, Hong Kong mandated 21 days of hotel quarantine and banned flights from several major markets including the US and UK. Strict rules on flight crew movements left Cathay operating at about 2% of its pre-virus passenger capacity in some months during the first half.

That figure is back to 11% and Cathay has said it aims to lift it to 25% by the end of the year, a target that for now remains unchanged and constrained by strict rules on flight crews.

The airline said Wednesday its ability to operate more flights was “severely constrained by a bottleneck on crewing resources under the existing quarantine requirements.”

“We will only be able to operate more flight capacity when the existing stringent travel restrictions and quarantine requirements applicable to Hong Kong-based aircrew are lifted,” Healy said.

Cathay’s shares pared earlier gains after the results were released, to be up 1.2% in afternoon trading. They’re up about 35% this year, the best performance on a Bloomberg gauge of global airline stocks. Cathay avoided collapse in 2020 when Hong Kong’s government backed a plan to raise HK$39 billion.

Still, the contrast with pre-pandemic capacity shows how far one of Asia’s most prestigious carriers has fallen.

Rival Singapore Airlines Ltd., which is also reliant on international travel, is racing toward 81% of January 2020 capacity with the city-state having dismantled basically all its travel restrictions. Plans for a so-called travel bubble with Singapore would have provided some traffic for both airlines, but they never materialized due to coronavirus outbreaks.