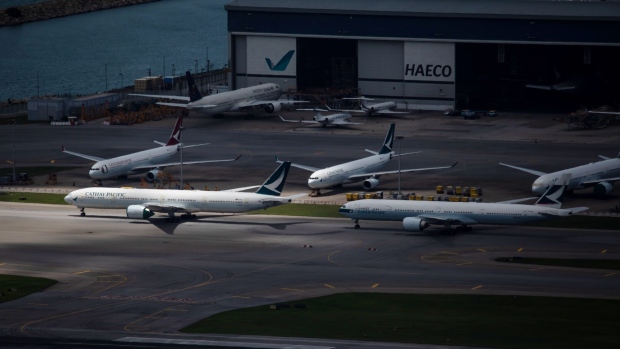 Aircraft operated by Cathay Pacific Airways Ltd. are seen through a barbed-wire fence as they stand parked on the tarmac at Hong Kong International Airport in Hong Kong, China, on Tuesday, June 9, 2020. Cathay became the latest global carrier to seek a lifeline in the aftermath of Covid-19 travel restrictions, outlining a plan to raise HK$39 billion ($5 billion) from the Hong Kong government and shareholders after months of warnings about the frailty of its business. , Photographer: Roy Liu/Bloomberg

Cathay Pacific Airways Ltd. hopes a recovery in travel demand will allow it to operate closer to 50 per cent of its pre-pandemic capacity later next year, provided there’s an effective COVID-19 vaccine widely adopted in its key markets.

The Hong Kong-based carrier expects to operate at about 10 per cent of typical capacity for the rest of 2020 and well below a quarter in the first half of 2021, Chief Customer and Commercial Officer Ronald Lam said in a statement Monday as the airline released another bleak set of monthly passenger figures.

“Among the multiple scenarios studied, this one is already the most optimistic that we can responsibly adopt at this moment,” Lam said of the capacity forecasts.

Cathay is expected to unveil details of a strategic review soon, with some reports suggesting job cuts could be announced as early as this week. The company, which posted a HK$9.9 billion (US$1.3 billion) loss in the first half, has for months been working on the review as it struggles to get through the coronavirus crisis, which it’s called the most challenging period in its history.

“September rounded off what has been an incredibly difficult summer, traditionally the peak passenger travel season of the year,” Lam said Monday. Cathay operated at nine per cent capacity during the month, up from 8% in August.