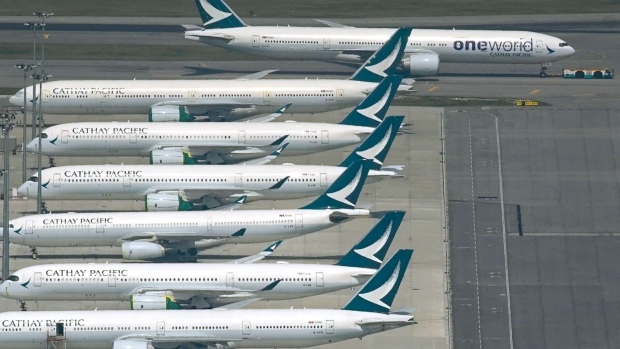 An aircraft operated by Cathay Pacific Airways Ltd., top, taxis on the tarmac passing the company's other aircraft at Hong Kong International Airport in Hong Kong, China, on Wednesday, Oct. 21, 2020. Cathay Pacific will cut about 5,300 jobs based in Hong Kong and and close its Cathay Dragon unit as part of a sweeping overhaul of the city's flag carrier triggered by the halt in air travel due to the coronavirus pandemic. Photographer: Roy Liu/Bloomberg , Bloomberg

Ready cash reserves stood at HK$31.7 billion ($4.1 billion) as of Oct. 31, more than twice the level in June last year when Cathay was burning through as much as HK$3 billion a month, the airline said in an update to analysts Wednesday. The business is now at around breakeven, it said.

Chief Financial Officer Rebecca Sharpe said Cathay may consider additional financing opportunities but it wasn’t yet possible to say if a HK$7.8 billion bridging loan from the Hong Kong government would be drawn down or extended again.

Under pressure from Covid, Cathay raised HK$39 billion in a recapitalization in July 2020 and embarked on extensive cash preservation measures, including staff layoffs, unpaid leave and pay cuts. The bridge loan that was part of the recapitalization -- codenamed Apollo -- was extended for another year in June.

Sharpe, who joined Cathay in January, was speaking at the briefing with Chief Commercial and Customer Officer Ronald Lam. He laid out the challenges the airline’s passenger business continues to face, operating at just 10% of pre-pandemic capacity as Hong Kong remains largely closed off to the rest of the world.

Lam said it was too early to assess the impact of the omicron variant, the emergence of which has prompted governments globally to enforce renewed travel restrictions and border closures. Given the uncertainty, Cathay doesn’t yet have a solid plan on its passenger schedule for the first quarter of 2022, he said.

Capacity also remains restrained due to Hong Kong’s strict quarantine rules that leave most pilots and crew stuck in isolation for long stretches after flying. Still, Cathay has sufficient crew at the moment, Lam said.

While Hong Kong’s Covid-Zero approach has left Cathay lagging other airlines in passenger capacity, it’s a temporary issue and the gap will be closed, he said. The carrier is liaising with airports worldwide about retaining summer slots from March, which would be a key issue, Lam added.

Cathay expects its second-half financial performance to show considerable improvement from the HK$7.6 billion loss in the first six months of the year. At the end of October, Cathay had a fleet of 236 aircraft, 68 of which were parked.