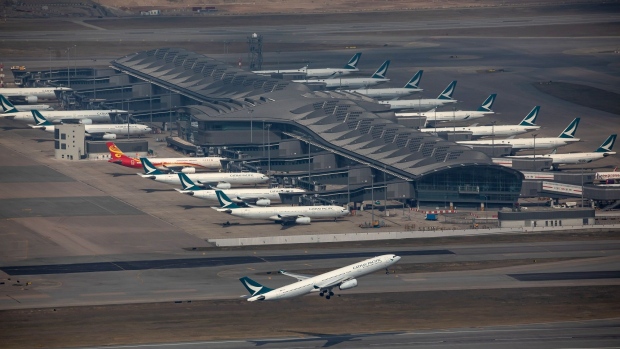 (Bloomberg) -- Cathay Pacific Airways Ltd. is still facing an exodus of pilots in Hong Kong and management, seeing no let up in the trend, is considering hiring options to the combat depleted crew ranks, senior executives said at a company town hall Thursday, according to a person who attended the meeting.

The carrier’s top management, including chief operations and service delivery officer Greg Hughes, admitted to staff that an initial spike in pilot resignations last November had remained at high levels through January and is expected to continue to be high in coming months, the person said.

Cathay didn’t immediately respond to a request for comment.

Hong Kong remains wedded to a Covid-zero strategy, isolated alongside China as the world’s biggest holdouts as other nations learn to live with the virus. A resurgence in community infections in the once-vibrant Asian financial hub, coupled with fresh curbs on a wide range of activities, continues to wear on the city’s residents.

To combat the exodus in the cockpit, Cathay said it plans to hire back all available ex-pilots from its now-defunct sister airline Cathay Dragon by the end of March, without specifying the total, adding to the 130 it recently brought back, the person said. A further 140 new cadets will undergo training this year and ex-graduate aircrew will be taken on, the person added.

Airlines globally are replenishing pilot ranks as the industry looks beyond the pandemic and there are renewed concerns about an industry shortage of talent. A global survey published this week found around one-third of commercial pilots still aren’t flying for a living.

Cathay recently said it intended to hire several hundred pilots in 2022 to prop up sagging morale. As of the end of last year, Cathay employed approximately 2,700 pilots, down from more than 3,100 in early 2021.

On Monday, Cathay said it was on track to report its first half-year profit since 2019, cushioning its ongoing pandemic losses. The airline is only operating at around 2% of pre-Covid passenger capacity and only a fifth for cargo.

The airline has ruled out forcing staff to take pay cuts or unpaid leave.