Cathie Wood’s Ark Investment Management is buying the dip in Tesla Inc., sticking with high-conviction names and setting aside a big disagreement with Elon Musk over Bitcoin.

Ark exchange-traded funds added more than 47,000 shares in the electric carmaker in the latest trading session, according to data released late Tuesday. While that’s worth a modest US$27 million, it’s the first time the firm has purchased Tesla since April.

Tesla has dropped 35 per cent from its January peak as inflationary fears spur investors to sell expensive assets -- prompting Wood to demonstrate her propensity to enlarge Ark’s positions in favorite tech bets at market lows. 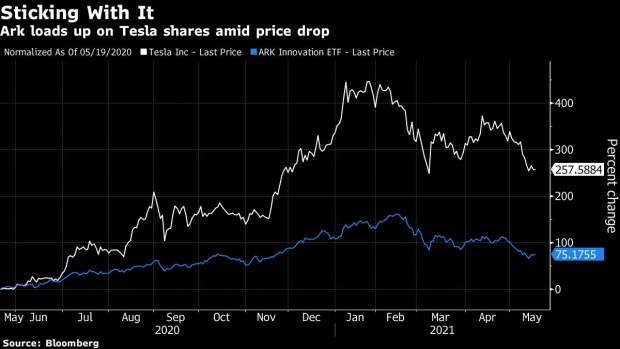 The firm also recently bought Twitter Inc. amid its worst week since October. And Wood has been consistently adding cryptocurrency exchange Coinbase Global Inc., whose shares have been declining for much of the past month after rallying in its April IPO.

Read more: Musk Splits From Cathie Wood’s Ark on Bitcoin Environmental CostSome of that retreat is likely down to Musk, who fueled a slump in the largest cryptocurrency after hitting out at the token’s high energy demands and reversing a decision to accept it as a form of payment.

With Ark a big proponent of Bitcoin and a believer in its green credentials, it’s all adding to recent drama in the world of speculative tech. While Wood appears committed to her Tesla bet, famed investor Michael Burry has been revealed to be betting heavily against the carmaker via put options.

Bitcoin has erased all the gains since Tesla’s Feb. 8 announcement that it would use corporate cash to buy the digital currency, and was trading at around US$37,900 as of 8:33 a.m. in New York. Tesla was down 3 per cent in premarket trading.

“Wood is making her move once again when everyone else is looking elsewhere,” said James Pillow, managing director at Moors & Cabot Inc.