The head of Ark Investment Management got rid of shares in tech behemoth Tencent Holdings Ltd. and property site KE Holdings Inc. every day last week, according to data on the firm’s trading activity.

Chinese regulators are taking increasingly drastic steps to tighten their grip on the world’s second-largest economy, in a move aimed at reducing inequality and financial risk, as well as strengthening the authority of President Xi Jinping’s Communist Party. Most recently, they imposed new rules that prevent companies involved in private education from making profits, raising capital or going public.

As the clampdown has intensified, so has Wood’s flight from Chinese stocks. Her largest fund, the ARK Innovation ETF, now has only 0.32 per cent of its US$23 billion in assets invested in Chinese companies, compared to 8 per cent in February. About 3.8 per cent of the ARK Next Generation Internet ETF’s holdings is still invested in China, but that’s down from almost 9 per cent earlier this year. 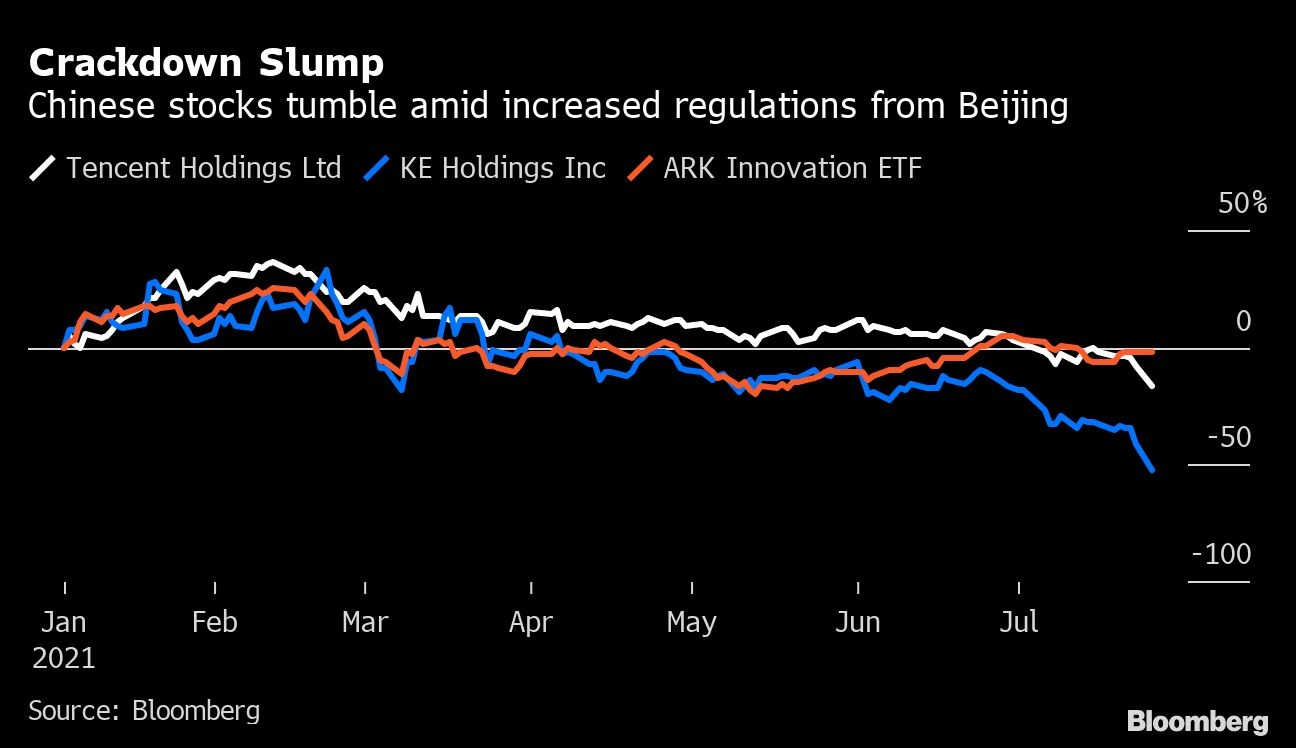 “I think it's the responsible thing to do,” Matt Maley, chief market strategist for Miller Tabak + Co., said about Wood reducing her positions. “There is just too much uncertainty surrounding what China might do next.”

Beijing’s latest move sent shares of Chinese technology and educations companies spiraling, with the Nasdaq Golden Dragon China Index on track for its biggest two-day drop since 2008. Losses since February in those industries’ stocks now exceed US$1 trillion. Property-management and food-delivery companies slumped Monday on concern that rules will tighten for both sectors.

“China’s economy and companies have tremendous growth potential, but it’s important to weigh how much of your portfolio you want exposed to political and currency risks,” said Chris Zaccarelli, chief investment officer at Independent Advisor Alliance.

As of a couple of weeks ago, Ark hadn’t changed its outlook or five-year price targets on larger Chinese tech stocks that it owns. “The regulatory changes have not, for the most part, impacted the businesses from a fundamental point of view with regards to cyber security clients or U.S. listing reviews,” Ark’s Asia innovation analyst, Yulong Cui, said on a webinar with investors on July 13.