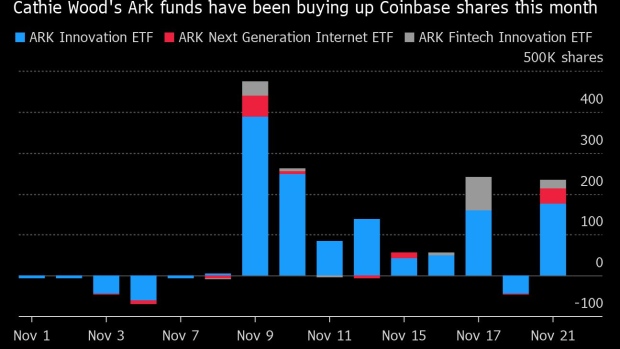 (Bloomberg) -- Wall Street’s waning conviction in Coinbase Global Inc. has done little to deter Cathie Wood. Instead, she’s been scooping up shares of the struggling cryptocurrency exchange in the wake of the collapse of Sam Bankman-Fried’s FTX.

Wood’s Ark Investment Management funds have bought more than 1.3 million shares of Coinbase since the start of November, worth about $56 million based on Monday’s trading price, according to data compiled by Bloomberg. The shopping spree, which started just as FTX’s demise began, has boosted Ark’s total holdings by roughly 19% to about 8.4 million shares. That equates to around 4.7% of Coinbase’s total outstanding shares.

Ark funds have also been adding to stakes in other cryptocurrency-related assets, namely Grayscale Bitcoin Trust and shares of crypto bank Silvergate Capital Corp. in recent weeks. The increased buying from Wood bucks the broad crypto selloff this year, including slides in tokens such as Bitcoin and Ether.

Coinbase initially rebounded in the days following Ark’s first purchase on Nov. 8, due in large part to softer-than-expected US inflation data which sent risk-assets surging globally. That rally, however, was short-lived for the crypto exchange, with its stock price falling for four consecutive days, including an 8.9% drop on Monday to close at a record low.

The majority of Ark’s Coinbase holdings are from its flagship ARK Innovation ETF which has nearly 6 million shares for a weighting of about 3.6%, the fund’s 13th largest position. While the ARK Next Generation Internet ETF and ARK Fintech Innovation ETF each only hold just over 1 million shares, Coinbase’s weighting in the two funds is far higher at 5.4% and 6.3% respectively, according to data on Ark’s website.

Ark’s renewed interest in Coinbase stands in stark contrast to the sentiment emanating from Wall Street for the better part of the last six months. Analysts from firms including Bank of America Corp. and Daiwa Securities Group Inc. have downgraded the stock this month, leaving it with just 14 buy-equivalent analyst recommendations, its lowest number since August 2021.

Coinbase and Silvergate Capital have both shed more than 80% of their value this year. Those losses are even deeper than those suffered by the world’s two largest cryptocurrenices -- their prices have declined by more than 65% in 2022 with the plunge accelerating this month in the wake of the FTX collapse.

The Coinshares Block Index, which tracks 45 global stocks with varying exposure to the cryptocurrency sector, was little changed Tuesday after falling 2.5% in the previous session.

(Updates data on buying of Grayscale and Silvergate, performance of Coinshares Block Index)