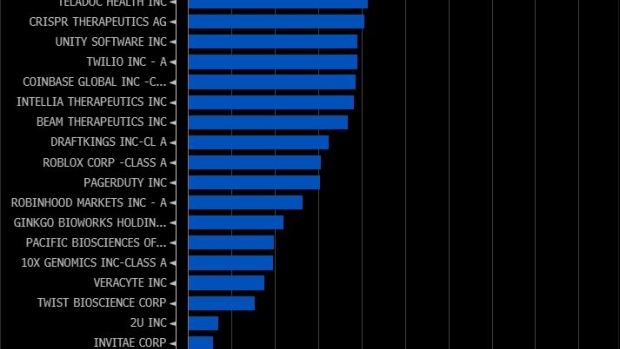 (Bloomberg) -- A sharp two-day gain in shares of Exact Sciences Corp. has made them the top holding of Cathie Wood’s flagship fund even as it has been paring its stake in the Cologuard producer.

The rally comes at a time when Wood’s main fund has been selling the shares of the company for nearly a month. It sold 320,395 shares in the company on Tuesday, bringing its total sale to a little over 910,000 shares since Dec. 14, when the selling streak started, according to daily trading disclosures from Wood’s firm.

Even after paring some of its stake, Ark Investment is bullish on the long-term outlook of the oncology testing services provider in which it remains the second biggest shareholder. Data compiled by Bloomberg show that Ark Investment Management still owns about 8.3% of the company, with the majority held by the flagship fund.

Given Exact Sciences’ competitive advantages including clinical evidence and industry partnerships, “shares could compound at an average annual rate of 25%, reaching $140 by 2027,” Simon Barnett, a director of life sciences research at the fund manager wrote on its website on Jan. 4. Ark’s expectation implies the stock will rise 133% during that period.

Exact Sciences, like other growth stocks and Ark’s ETFs, took a hit last year with a drop of 36% amid the Federal Reserve’s aggressive interest-rate hikes.

This year has started off well for Wood’s flagship fund, which is up 7.6% after falling 67% the previous year.