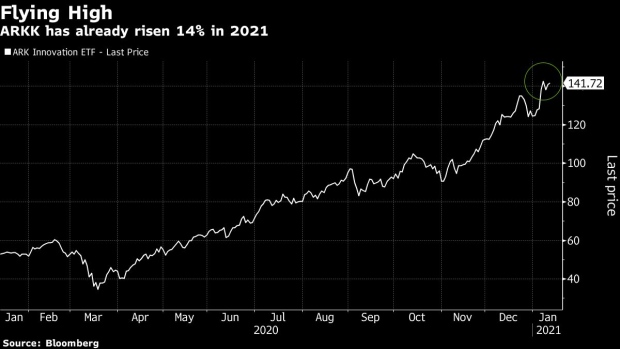 Cathie Wood, chief executive officer and chief investment officer of ARK Investment Management LLC, speaks during the Sooner Than You Think conference in the Brooklyn borough of New York, U.S., on Tuesday, Oct. 16, 2018. From AI-enabled robo-investing to the implications for retail of a cashless world to the impact on monetary policy if and when governments move to digital tender, technological innovation is rapidly changing our relationship to money, creating major new opportunities but also creating poorly understood risks. , Photographer: Bloomberg/Bloomberg

(Bloomberg) -- After a stratospheric year, Cathie Wood’s Ark Investment Management is ready to take it a step further: Into space.

The New York-based firm is planning to launch the ARK Space Exploration ETF (ticker ARKX), according to a filing with the Securities and Exchange Commission. The actively managed exchange-traded fund will primarily track U.S. and global companies engaged in space exploration and innovation.

After massive inflows over the past year, the once-niche firm now oversees about $41.5 billion in ETF products, compared with less than $3.5 billion in the same period in 2020, according to data compiled by Bloomberg. Ark recently became a top-10 ETF issuer, thanks in large part to its $21.6 billion flagship Ark Innovation ETF (ARKK) that has Tesla Inc. as its biggest holding. While the vast majority of ETFs passively track indexes of stocks, Ark offers five actively managed U.S. ETFs, and Wood runs all of them.