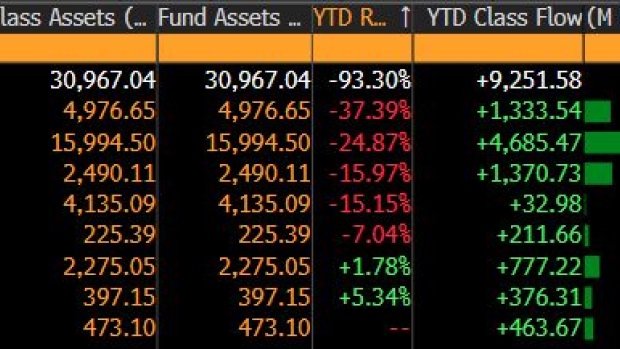 (Bloomberg) -- Cathie Wood is preparing to launch only her second new U.S. exchange-traded fund in almost three years this week, just as her existing lineup is lashed by tech-led market turmoil.

The ARK Transparency ETF (ticker CTRU) will be ARK Investment Management LLC’s ninth ETF and the third to track an index. The fund is expected to begin trading on Wednesday, according to the firm’s website.

It looks set to arrive amid a big test for Wood and her disruptive vision. ARK products have been slammed by market volatility, with investors ditching the kind of unprofitable tech bets beloved by the firm.

The flagship ARK Innovation ETF (ARKK) just posted its worst week since February, sliding 12.7% to the lowest in more than a year. Six of the firm’s eight strategies are down in 2021, with the worst performer -- the ARK Genomic Revolution ETF (ARKG) -- losing 37%.

Wood and her team were always destined to struggle to repeat 2020’s stellar year, when ARKK returned about 150% to beat most of the market and lure billions in new flows. But performance has gone from bad to worse in the past month, as policy makers signaled a more hawkish monetary stance. Many of ARK’s big bets are on companies with profits expected in the future, which now have to be discounted against potential increases in interest rates.

“Sentiment toward ARK has started to shift as thematic funds like ARKK and siblings have struggled to repeat its performance success in 2021,” said Todd Rosenbluth, head of ETF and mutual fund research at CFRA. “We expect the ETF to still garner some interest as ARK still has a strong ETF brand and it provides exposure to a new approach that could complement ARKK.”

With CTRU, Wood will be looking to tap booming demand for investments with higher environmental, social and governance standards.

The planned new fund will follow an index that excludes industries including alcohol, banking, gambling and oil and gas. Some of the largest constituents in the 100-company gauge are tech and consumer firms such as Nvidia Corp., Tesla Inc. and Nike Inc.

A spokesperson for ARK didn’t immediately respond to a request for comment on the new launch.

With about $31 billion in its existing U.S. ETF lineup, ARK is the 11th-biggest issuer in the U.S. Its last new fund was the ARK Space Exploration & Innovation ETF (ARKX), which launched near the height of Wood’s popularity in March and was one of the biggest debuts on record.

“The launch of ARK Space ETF at the end of the first quarter of 2021 was well-timed,” said Rosenbluth. “The fund benefited from the halo ARK had established in 2020 when it was the darling of the ETF world.”

Despite the recent rough patch, investor loyalty has been strong. A $12 billion drop in assets in the flagship ARKK fund is mostly linked to market declines, with only about $400 million leaving the fund on a net basis since assets peaked at $28 billion in February.

Meanwhile, the ETF has shown a historic ability to rebound fast -- it rallied more than 30% in six weeks in the middle of the year. That was the last time its 14-day relative-strength index dropped below 30, which is usually a sign to technical analysts a security has fallen too fast and could be poised to rebound. The reading is currently at 20.

The slump has been good news for a young fund offering an inverse bet on ARKK, the Tuttle Capital Short Innovation ETF (SARK). SARK has been surging in recent weeks and is up more than 25% since launching almost a month ago.