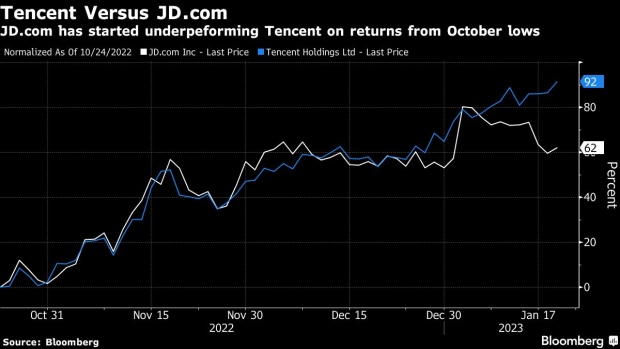 (Bloomberg) -- Cathie Wood is back to selling JD.com Inc. shares after a hiatus of about six months as Chinese technology stocks see a historic rebound helped by regulatory easing.

The asset manager is offloading JD even as China’s internet sector, once dubbed “uninvestable,” is regaining favor on the Wall Street amid an exit from Covid-related restrictions and easing of years-long crackdown on the sector. The e-commerce operator’s ADRs have risen about 62% since their lows in October, trailing the more than 90% increase in sector bellwether Tencent Holdings Ltd.’s US listing.

JD was among the first companies Wood bought in 2021 after earlier dumping Chinese tech stocks. Following Beijing’s regulatory squeeze that wiped out more than $2 trillion from the sector’s valuation at one point, she started cutting holdings and kicked it out from ARK Autonomous Technology & Robotics ETF. After Thursday’s sale, the firm holds 150,318 shares of JD.

China’s approval of $1.5 billion in funding for billionaire Jack Ma’s Ant Group Co. is one of the most visible signs of regulatory easing in Beijing. In the latest positive for the sector, Didi Global Inc.’s main apps have returned to China’s biggest mobile stores after the company spent more than a year in regulatory limbo.

Wood, whose flagship fund is up 11% after falling 67% last year, is buying other growth stocks, including electric-vehicle maker Tesla Inc. and crypto exchange Coinbase Global Inc.

Her fund frequently says their investment horizon is at least five years, and they recognize that the disruptive companies they seek are frequently volatile. The daily trading updates from ARK show only active decisions by the management team and do not include creation or redemption activity caused by investor flows.