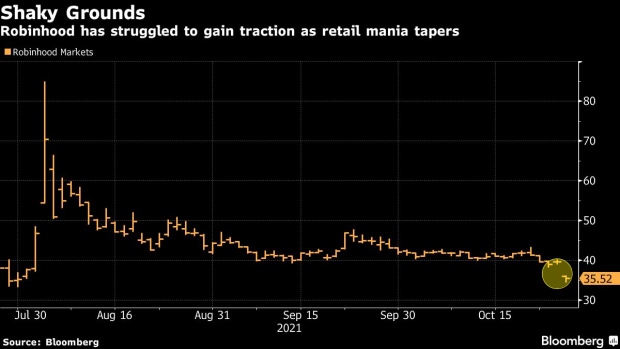 A pair of Ark exchange-traded funds bought more than 836,000 shares, worth at least $32.4 million, of Robinhood in the two days leading up to the company’s third-quarter earnings released Tuesday evening. The bet suffered a blow on Wednesday as shares of Robinhood plunged as much as 13% to trade below its IPO price after cryptocurrency transactions fell.

Wood’s flagship fund, the ARK Innovation ETF (ARKK), has dipped 3.9% this year, compared to the S&P 500 Index’s more than 20% return. With Robinhood shares down 58% from an August record, ARK’s bet on the future of the brokerage startup has been facing strong headwinds. The firm is among the stock’s five largest holders.

But the rough reception from Wall Street to Robinhood’s earnings miss contrasts with the buy-the-dip mentality from individual investors. The stock was trending on trader chatroom Stocktwits, with retail traders discussing buying shares of the broker, and it is among the most actively bought assets on Fidelity’s platform alongside Tesla Inc.

It is worth noting that Ark has steadily added to positions since Robinhood’s debut in July. Wood has been vocal about her five-year investment horizon which she factors into her investments despite the day-to-day volatility for many of her targets.

ARK bought at least $32.4 million worth of stock on Monday and Tuesday, according to daily trading data from Ark Investment Management. Ark held a stake of roughly 9.74 million shares in Robinhood, worth about $385 million as of Tuesday’s close, Bloomberg data show.

Robinhood warned investors that the more suppressed retail trading environment may linger through the end of the year as the pace of new user sign-ups tapers.  Shares trimmed losses to 10% to trade at $35.52 as of 11:47 a.m. in New York, below the company’s IPO of $38.

Ark daily trading updates show only actions by the investment management team, and do not include redemption activity caused by investor flows.