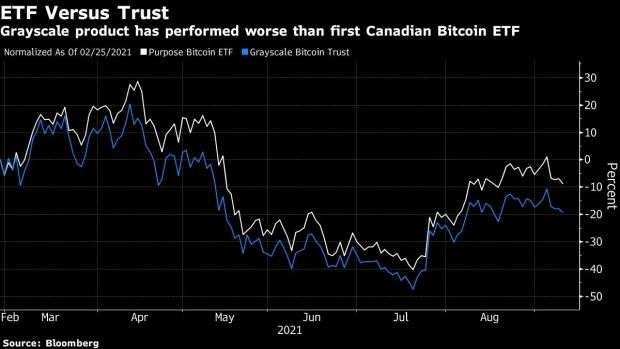 (Bloomberg) -- Cathie Wood’s Ark Investment Management is allowing one of its funds to invest in Canadian Bitcoin ETFs as the money manager seeks fresh ways to bet on digital assets.

In a late-Friday filing for the $5.7 billion ARK Next Generation Internet ETF (ticker ARKW), the firm tweaked the fund’s prospectus to include reference to holding exposure to cryptocurrencies via “exchange-traded funds domiciled in Canada.”

The move comes after the $1.3 billion Amplify Transformational Data Sharing ETF (BLOK), a blockchain-focused product, was last week shown to have a tiny stake in three Canadian Bitcoin ETFs.

Investors and issuers in the $6.8 trillion U.S. ETF market are still waiting for regulators to approve exchange-traded products investing in cryptocurrency. While Canada and Europe have raced ahead, a huge backlog of applications has built up with the Securities and Exchange Commission. Ark is among those in line, having teamed up with Switzerland-based 21Shares AG to file plans for a fund in the U.S.

ARKW already boasts some Bitcoin exposure -- about 5.5% of the fund is invested in the Grayscale Bitcoin Trust (GBTC), according to data compiled by Bloomberg.

The $30 billion vehicle is arguably one of the easiest ways for investors to access cryptocurrencies in the U.S. via a fund, but its structure makes it inefficient and its value frequently detaches from that of the Bitcoin it holds.

As of Friday, GBTC was down about 20% since the first Canadian Bitcoin ETF launched in February. That fund, the Purpose Bitcoin ETF (BTCC) has dropped 9%. ARKW has lost about 6.5% since then, but is still up 2.3% year-to-date. It has lured about $691 million in new cash in 2021.

A spokesperson for Ark didn’t immediately respond to a request for comment on the documentation changes.