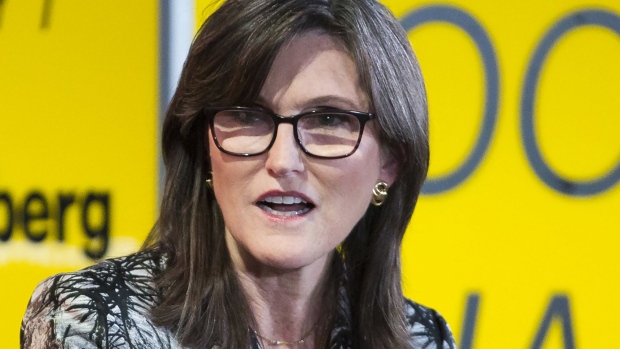 Cathie Wood, chief executive officer and chief investment officer of ARK Investment Management LLC, speaks during the Sooner Than You Think conference in the Brooklyn borough of New York, U.S., on Tuesday, Oct. 16, 2018. From AI-enabled robo-investing to the implications for retail of a cashless world to the impact on monetary policy if and when governments move to digital tender, technological innovation is rapidly changing our relationship to money, creating major new opportunities but also creating poorly understood risks. , Photographer: Bloomberg/Bloomberg

The ARK 21Shares Bitcoin Futures Strategy ETF, ticker ARKA, plans to invest in Bitcoin futures contracts that trade on commodity exchanges, according to a Wednesday filing with the Securities and Exchange Commission.

Alpha Architect, a white-label issuer of ETFs, submitted the filing, while 21Shares US LLC -- an affiliate of Zug, Switzerland-based 21Shares AG -- is listed as the sub-adviser. Ark Investment Management has agreed to provide marketing support for the sub-adviser.

ETF issuers have been rushing to submit applications for funds tracking Bitcoin futures, after SEC Chairman Gary Gensler said he would be more open to approving one that is submitted under the Investment Company Act of 1940, which offers more investor protection. At the beginning of the month, nine Bitcoin futures ETF applications were being considered by U.S. regulators, according to Bloomberg Intelligence.

Wood earlier lent her firm’s name to ARK 21Shares Bitcoin ETF, ticker ARKB, which would track the performance of the world’s largest cryptocurrency as measured by the S&P Bitcoin Index, according to a June filing.

But since the first attempt to launch a Bitcoin ETF in 2013, the SEC has refused to permit a fund that physically holds the cryptocurrency, citing concerns about fraud and manipulation. Bitcoin futures, on the other hand, are viewed more favorably, since they are governed by the Chicago Mercantile Exchange and require investors to put down cash on margin to trade. For instance, investors in CME Micro Bitcoin futures have to put up a minimum of 35% of the amount that the futures contract represents.

“It’s a no brainer for Ark because they will likely be able to instantly seed it with about half a billion that they currently have in GBTC,” said Bloomberg Intelligence’s Eric Balchunas, referring to the Grayscale Bitcoin Trust. “Having that kind of start is really helpful, especially if they are the seventh or eighth one approved. Ark also has a strong base of younger investors who probably would use this as well. Closest thing to a surefire hit as you’ll see.”

An Ark spokesperson declined to comment on Wednesday’s filing.

Although 21Shares isn’t well known stateside, the firm has gained recognition in Europe for its crypto exchange-traded products tracking everything from Bitcoin to Ripple and Polkadot. Wood joined the board of Amun Holdings Ltd., which operates 21Shares, in May after personally investing in the company.

(Updates with details on Bitcoin futures in sixth paragraph.)