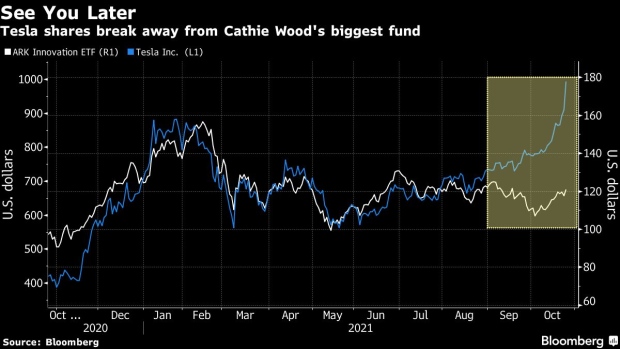 (Bloomberg) -- Cathie Wood’s flagship fund is still underwater for the year, even as its top holding soars to an all-time high.

Tesla Inc., which comprises about 10% of the $21 billion ARK Innovation ETF (ARKK), surged to another record. The Elon Musk-led carmaker has been on a tear amid a global shift to electric vehicles, with its stock surging almost 45% in 2021. While the rally helped lift ARKK on Monday, the exchange-traded fund is still lower by about 2% in 2021 as some big names in the portfolio struggle.

Since early August, 34 of ARKK’s 46 holdings have fallen, with losses in Roku Inc. and Zoom Video Communications Inc. weighing heavily on the ETF’s performance, according to Bloomberg data. To make matters worse, Wood’s funds have also been offloading shares of the electric-vehicle maker over the past few months.

“Teladoc, Roku, Zoom, Zillow, etc -- they’ve all performed quite poorly” and Wood has been cutting back on her Tesla position as well, said Matt Maley, chief market strategist for Miller Tabak + Co. “It shows that the continued rally in the big innovation stocks is really starting to narrow quite a bit.”

Ark’s performance in 2021 means essentially nothing to anyone who has held on for its 500% rally since 2016, of course, though it does highlight the perils of investing in cutting edge technology. Very few of Wood’s picks sit still over periods of months or quarters, and a couple big drops in relatively heavily weighted companies can easily torpedo returns.

ARKK was one of 2020’s highest fliers, propelled by its tech-heavy holdings as Treasury yields cratered. Building inflation expectations and climbing rates have dented performance since, with the fund set to fall for the first year since 2016.

The ETF has staged a comeback this month, rising 10% in October after September’s 9.4% slide. However, the Federal Reserve’s tapering of its bond-buying program -- expected to kick off in November or December -- should continue to weigh on the disruptive growth stocks that Wood tends to gravitate towards, according to Maley.

“A lot of these innovative stocks got an extra boost from the Fed’s massive stimulus program,” Maley said. “Investors realize that the Fed is going to pare back.”