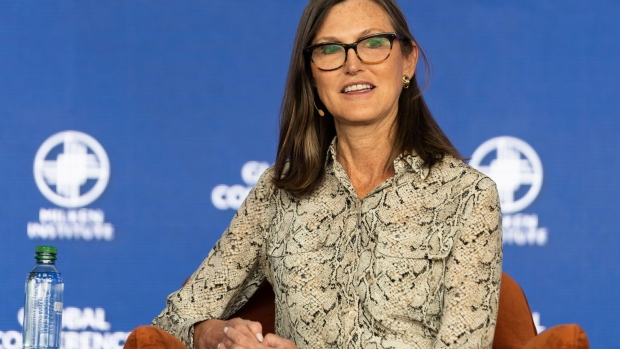 Catherine Wood, chief executive officer of ARK Investment Management LLC, participates in a panel discussion during the Milken Institute Global Conference in Beverly Hills, California, U.S., on Monday, May 2, 2022. The event convenes the best minds in the world to tackle its most urgent challenges and to help realize its most exciting opportunities. , Bloomberg

(Bloomberg) -- Cathie Wood’s Ark Investment Management is suffering a steeper drop in assets than almost any other US exchange-traded fund issuer this year.

Ark’s lineup holds $15.3 billion across nine ETFs, a 48% decrease from the start of 2022, according to data compiled by Bloomberg Intelligence through June 1. That’s the biggest collapse in assets among the 25 largest US issuers.

Notably, the drawdown in assets is a result of weak performance rather than investors yanking out cash. While all nine Ark ETFs have posted double-digit losses in 2022, dragged down by declines in richly valued technology shares, the lineup is still clinging to net inflows of $167 million. While such a dismal showing would normally prompt an investor exodus, Wood has cultivated a loyal following on social media and a reputation for her disruption-focused bets, Bloomberg Intelligence’s Athanasios Psarofagis said.

“It’s definitely pretty unprecedented because most would probably collapse if they had the same performance, but Cathie and Ark have a strong following,” said the ETF analyst. “The big Twitter presence and the funds are truly very unique.”

Wood emerged as a star manager during the pandemic, when trillions of dollars worth of fiscal and monetary stimulus drove valuations on speculative tech firms and growth shares to eye-watering heights. The firm’s flagship Ark Innovation ETF (ticker ARKK) soared almost 150% in 2020.

Now, with the Federal Reserves tightening policy, ARKK has plunged almost 55% this year, the second-worst showing among the firm’s funds. ARKK currently holds $8.5 billion, down from more than $16 billion at the start of 2022 and from a high-water mark of around $28 billion in February 2021.

For Ark, a combination of loyalists and dip-buyers is likely limiting outflows despite “massive” underperformance, according to The ETF Store’s Nate Geraci. For context, the tech-heavy Nasdaq 100 has dropped roughly 24% this year.

“Diehard Cathie Wood loyalists, ‘disruptive tech’ bottom fishers, and ETF shares being created for short sellers are all helping to staunch outflows,” said Geraci, president of the advisory firm. “It seems that one or more of these groups will have to throw in the towel before ARK experiences meaningful outflows.”