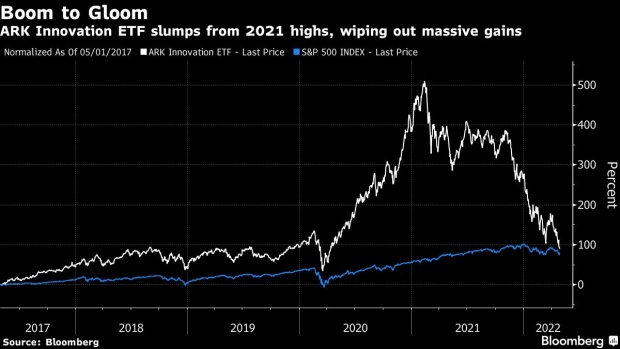 (Bloomberg) -- Cathie Wood’s flagship ARK Innovation fund is headed for its worst-ever month as April goes from bad to worse for the one-time star stock picker.

With a day’s trading to go, the ETF is down 26%, easily eclipsing the previous steepest monthly plunge in January. The fund has declined almost 70% from its all-time high in 2021 after key holdings like Zoom Video Communications Inc. and Teladoc Health Inc. tumbled from their pandemic-inspired records.

It’s a dramatic change in fortunes for Wood, whose stock selections surged at the height of the pandemic as a locked-down world embraced virtual birthday parties and online doctor appointments. With many economies returning to normal and the Federal Reserve tightening monetary policy, so-called high-growth companies in ARK Innovation’s basket have plunged.

What’s more, the fund’s outperformance against the S&P 500 Index is also disappearing. While the ARK Innovation ETF has returned 109% in the last five years against 97% for the U.S. benchmark, that’s a far cry from being almost four times better until the end of last year.

This week has been particularly brutal, with a record 40% selloff in Teladoc following a sales warning. In fact, Teladoc on Thursday became the biggest drag on the portfolio in 2022. Out of 37 stock holdings, only Signify Health Inc. is in the green for this year. Wood’s top holding, Tesla Inc., is experiencing its worst month since March 2020.

“The debate about whether Cathie Wood just rides beta up and beta down, or is genuinely capable of providing alpha, will continue to rage,” said Russ Mould, investment director at AJ Bell. Alpha refers to an investment idea that produces benchmark-beating returns, while beta denotes moves caused by volatility.

Still, investors seem to be keeping faith in Wood. The fund has so far attracted $231 million inflows in April despite its performance, and there have been no major redemptions in recent months.

Wood’s repeated message is that her investment horizon is at least five years, and that the potential of the innovative companies ARK targets is huge. The fund has often used pullbacks in its high-conviction names to increase positions, even as some on Wall Street fret over concentration risk.

That was the case this week, with the firm’s daily trading report showing that it boosted its Teladoc stake during Thursday’s plunge.