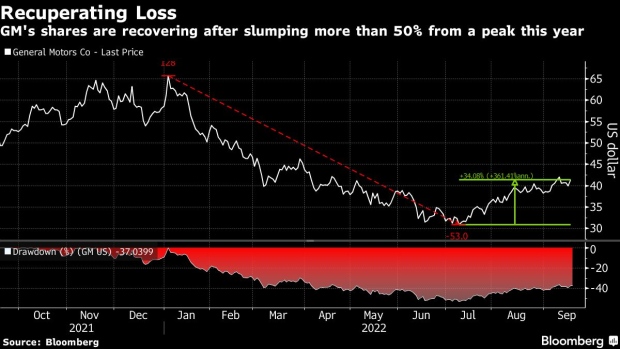 (Bloomberg) -- Cathie Wood’s fund scooped up shares of General Motors Co. for the first time in more than four months as the US automaker’s stock shows signs of a revival.

Ark Autonomous Technology and Robotics ETF bought 120,004 shares of the automaker on Monday, boosting its holdings from around 143,000 before, according to trading data compiled by Bloomberg. That marks Ark Investment Management Llc’s first purchase of GM’s shares since May 9.

Following a more than 50% drawdown this year through July, GM’s shares have been gradually recovering as the company bets on selling affordable electric vehicles. The car maker is also looking past previous glitches and expanding a robotaxi service ran by Cruise, the autonomous vehicle startup that’s 80% owned by GM.

Cruise is targeting $1 billion of revenue by 2025, more than three years earlier than what Morgan Stanley forecasts in its model, the US investment bank wrote in a note last week.

“We find investor sentiment on Cruise relatively split between wanting GM to cut its losses and scale back the ambition, while others believe Cruise is a competitive advantage and a major value driver for the stock,” analysts including Adam Jonas wrote.

But the latest purchases suggest Cathie Wood is on a dip-buying binge again. The firm bought 27 stocks across its eight ETFs on Sept. 13 as the technology-heavy Nasdaq 100 posted its worst one-day drop since March 2020.