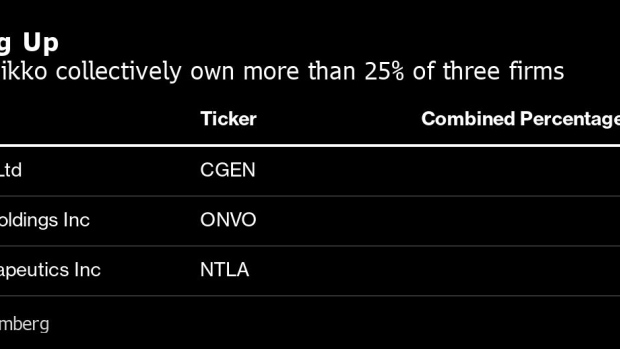 (Bloomberg) -- A rough week for Cathie Wood is reminding Wall Street that Ark Investment Management has a lot of cash in not that many companies. In fact, the firm’s dominance in some stocks may be even greater than it seems.

Ark now owns more than 10% of at least 29 companies via its exchange-traded funds, up from 24 just two weeks ago, according to data compiled by Bloomberg.

Less discussed are holdings of Nikko Asset Management, the Japanese firm with a minority stake in Ark that it has partnered with to advise on several funds.

When combined, the pair own more than 25% of at least three businesses: Compugen Ltd., Organovo Holdings Inc. and Intellia Therapeutics Inc. Together they control 20% or more of an additional 10 companies.

These concentrations would appear to exist because several Nikko products follow the investment blueprint provided by Ark. The company Wood founded in 2014 invests in disruptive themes like genomics and fintech -- and the Nikko products do, too.

Because there are only so many stocks that fit these emerging themes and Wood has been so successful at attracting new cash, much of it floods into the same companies.

“At arms-length, Ark provides non-discretionary investment advisory services to certain Nikko products, and Nikko is a distributor of Ark’s products,” a spokesperson for the U.S. firm said. Ark’s website identifies five of its strategies as being “available in Japan in partnership with Nikko Asset Management.”

Ark and Nikko did not respond to requests for comment on the concentration risk.

The high shareholdings aren’t necessarily a problem for either the fund managers or the companies, and the relationship between the two firms is clearly announced on both their websites. But such concentrated ownership stirs concern in some quarters about unintended consequences.

“The biggest risk has everything to do with their footprint,” said Ben Johnson, Morningstar’s global director of ETF research. “Even treading lightly, they’re going to have some sort of market impact that is going to push prices against them.”

In other words, fund outflows could have an outsized impact on the shares held by Ark and Nikko if they are forced to sell.

There’s no sign of this yet. Three of Wood’s funds -- the flagship ARK Innovation ETF (ARKK), ARK Genomic Revolution ETF (ARKG) and the ARK Next Generation Internet ETF (ARKW) -- are on track for record outflows this week after rising yields and lofty valuations hit the tech sector, but there has been no obvious specific contagion. ARKK closed up 0.7% on Friday after a four-day slump, bringing its weekly loss to 14.6%.

Wood has been using mega-cap stocks to soak up the pile of cash her firm received, which should help limit Ark’s impact in less-liquid names.

Still, there are worries that these ownership concentrations are a risk for Ark and Nikko and their investors. A pullback in any of the heavily owned sectors could force them to reduce their stakes, which could trigger more declines and therefore more selling.

“The concern would be performance slips, investors begin exiting the Ark funds and that would ultimately result in redemptions,” said Nate Geraci, president of the ETF Store, an advisory firm. “That could put further negative pressure on those securities and you create this negative feedback loop. This isn’t an issue for larger broad-based ETFs, but for ETFs that are more concentrated and own small-cap securities there absolutely could be some negative pressure there.”

In general, companies heavily owned by Ark show higher-than-average short interest, though it’s impossible to say if that’s linked to worries about ownership or simply because they are riskier bets.

The average short interest as a percentage of float for ARKK holdings is 4.4%, according to Bloomberg calculations based on data from IHS Markit Ltd. The average is 3.4% for Russell 3000 companies and 2.3% for those in the Russell 1000.

The options market shows that bears haven’t jumped in quite yet, however. Of the 29 stocks that ARKK owns more than 10% of, only five have seen more puts than calls trade on average over the last five days. While put activity has increased broadly, the average put-to-call ratio stands at 0.7, a little more than half of what it is for Russell 3000 stocks.

Perhaps that’s because wagering against Wood hasn’t worked out very well in the past. Almost every bet like that has lost money in the subsequent six months as prices rebounded, Bloomberg Intelligence analyst Eric Balchunas wrote in a note this week.

“The fund’s outflows rarely last, and dips have tended to attract buyers in the past,” Balchunas wrote.