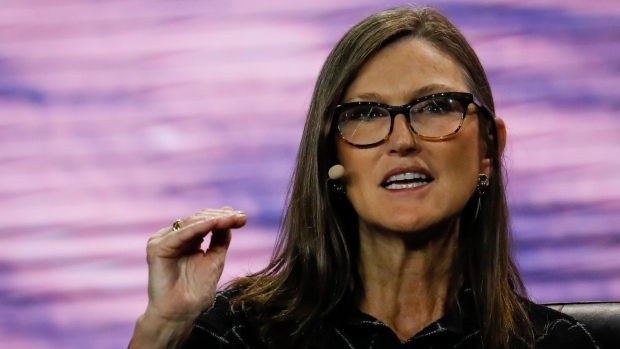 (Bloomberg) -- Cathie Wood says the massive inventories now held by US companies suggest that inflation will die down.

“I’ve never seen inventory surges like this in my career and I’ve been around for a long time,” the head of Ark Investment Management said in an interview with Bloomberg Television Wednesday. “This inventory issue highlights the cyclical reason we’ve been saying we think inflation will unravel.”

Major retailers that amassed stockpiles last year amid soaring consumer demand and supply chain bottlenecks are now struggling with bloated inventories. On Tuesday, Target Corp. cut its profit outlook for the second time in three weeks on an inventory surge.

Inflation and the start of Federal Reserve rate hikes have put Ark’s innovation-themed funds under pressure. The flagship Ark Innovation ETF (ticker ARKK) has fallen 50% this year. While investors have been gripped by the fear of inflation, “the greater risk by far is deflation,” Wood said.

The interview took place at UP.Summit, a conference on the future of mobility hosted by Walmart Inc. heirs and Up.Partners, a venture capital firm investing in mobility startups that Wood personally backs.

One of Ark’s most famous bets has been on Tesla Inc. After Ark trimmed its Tesla holdings for at least four quarters in a row, it’s been buying the electric carmaker again after the stock sunk nearly 50%.

As Chief Executive Officer Elon Musk divides his time among several projects, including his pending Twitter Inc. deal, Wood said it’s important that he stay at Tesla to oversee development of autonomous driving -- a mode of transportation that her firm predicts will generate $10 trillion in revenue by 2030.

Wood also hinted at a new “crossover fund” she’s planning, but said she can’t say more due to regulations.